This tiny restaurant in Upper St. Clair departs from the boilerplate of local Thai menus

In happy contrast to a decade ago, Thai restaurants now abound in the Pittsburgh dining universe. They range from tiny take-out storefronts to swankier establishments built on the urban-bistro model. Everyone has a personal favorite, yet little is as formulaic, it seems, as the Pittsburgh Thai restaurant menu: starters, curries, noodles and stir-fries, and within those categories, the same familiar favorites, available with a choice of protein. We see just about the same summary of Thai cuisine just about everywhere we go.

Sawasdee Thai Kitchen, in a nondescript commercial building just off Washington Road in Upper St. Clair, is — in terms of space and business model — at the tiny-take-out end of the range. There are only three small tables in the place, and the decor doesn't even make an effort at evoking Thailand or its culture. Even the requisite television is tiny, perched atop a little table against one wall. But, in a radical departure from Pittsburgh tradition, it was tuned to Netflix, not sports, and our friendly server offered to stream whatever we wanted.

Even more exciting, Sawasdee departs from the boilerplate of the local Thai menu — not dramatically, but enough to attract our attention. Sure, there were the usual red, green and yellow curries, the pad Thai, the basil noodles. But there were also several variations and entire dishes new to us, plus an eclectic assortment of non-Thai dishes — and not just lackluster Chinese, but bulgogi, yakisoba and tempura, to name a few.

At first we thought scallion pancakes were part of the non-Thai offerings, but they were made with a quintessentially Thai ingredient — glutinous (a.k.a. sticky) rice flour — that gave them a distinctive character unlike typical scallion pancakes made with wheat flour. Sawasdee's were comprised of deeply browned, ultra-crispy, paper-thin layers reminiscent of pastry or phyllo. The presence of actual scallions was minimal, suggested only by some darker spots between the layers, but the pancake, dipped in a salty-tangy ponzu-like sauce, was so satisfying, we didn't really mind.

Larb, that addictive Thai salad of minced meat, ground toasted rice and fresh herbs, served over juicy lettuce with a tangy citrus dressing, was also excellent. Sawasdee's version was made with chicken and packed plenty of heat. Another notable aspect of the menu was just how much of it proclaimed itself spicy. Even pad Thai, that refuge of the mild palate, is available in a spicy version called "Country Pad Thai." We weren't asked to plot our spice preferences on any numerical scale, although more or less can be requested.

Having said that, the curries we ordered were mild. Angelique, a green-curry lover, was intrigued by one that swapped out eggplant for avocados, but ultimately she decided to try something new, kao soy. This dish featured a skein of egg noodles topped with layers of pickled cabbage, ginger, bean sprouts, scallion, cilantro and fried shallots, all in a yellow curry broth. Its flavor was deeply seasoned and savory, with a hint of sweetness that was beautifully balanced by the tangy cabbage, zingy ginger, earthy sprouts and aromatic herbs. Its texture — or rather, textures — were also wonderful: elastic noodles, crunchy sprouts, crispy fried shallots.

Panang crispy duck was not actually crispy, but it was hard to tell whether the skin had been so before a mound of curry-sauced vegetables had been piled on top. The presentation struck us as peculiar, perhaps a symptom of a kitchen more accustomed to take-out, but ultimately it didn't matter, because the panang curry sauce turned everything it touched delicious. Rich and spicy, it pulled together the duck, whose meat was succulent beneath its skin, and an array of vegetables — including crisp, barely cooked green beans, and red and green peppers — all topped with a generous handful of Thai basil and keffir lime leaves. 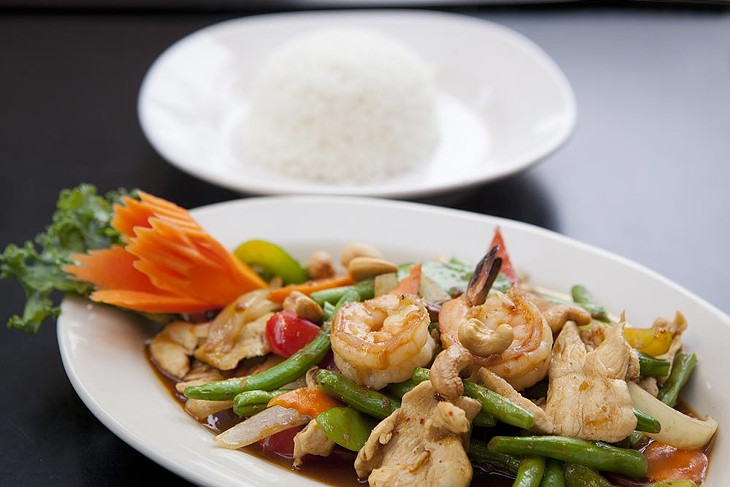 Massaman curry was another hit. This hearty, wintry dish makes good use of root vegetables, in this case, sweet potatoes, onions, carrots and peanuts. Sawasdee also included pieces of pineapple for bright and sweet notes that suggested sunshine and warmth to come. It was a dish altogether appropriate to this transitional season.

Tiny as Sawasdee is, we were not the only eat-in customers appreciating the fine food and prompt, polite service at this unassuming, yet excellent, Thai restaurant. If its reputation continues to grow, we may need to make reservations — or Sawasdee might need bigger accommodations.