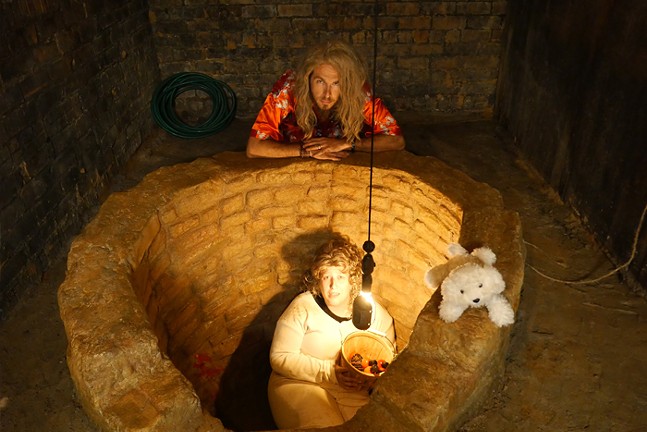 Photo: Courtesy of Buffalo Bill’s House
The replica well in Buffalo Bill’s House in Perryopolis, Pa.
Ever want to know what it feels like to be trapped in a well by a serial killer? Now you can, thanks to a new interactive experience at an iconic Western Pennsylvania property used in the film The Silence of the Lambs.

Buffalo Bill’s House, the Perryopolis, Pa. location used in some of the most memorable, oft-quoted scenes from the hit 1991 film, will invite guests to tour the home and surrounding property. Owner Chris Rowan, who converted the house into a ghoulish bed-and-breakfast for film fans, will lead the tours, which include visits to a replica of the basement well where the film’s serial killer Buffalo Bill held his captives.

A release describes the well, designed in partnership with Tom Savini’s Special Make-Up Effects Program at the Douglas Education Center in Monessen, Pa., as being “uncannily similar” to the one featured in the film. The four-foot-deep replica, which is constructed of real granite, resides in the property's former coal cellar.

Buffalo Bill’s House, a three-story, four-bedroom Queen Anne Victorian home originally built in 1910, was bought by Rowan in early 2021 and converted into a “boutique accommodation and cinematic destination” that can house a maximum number of eight guests at a time. On the business’ website, Rowan writes that, as an avid horror fan with a film and TV background, he set out to “preserve the history of the home” and share it with other people who love The Silence of the Lambs as much as he does.

The tours, which cost $65 per person and last from an hour and a half to two hours in length, take guests into the basement of the house, where they will be “immediately be greeted by sounds of dripping water along with audio clips from the film of the victim Catherine Martin (played by Brooke Smith) screaming for her life.” Guests can also cosplay as Catherine and be lowered into the well for “gruesome photo opps.”

The well set also features a stuffed animal version of Buffalo Bill’s dog Precious, the notorious lotion bucket, and “tube and knob lighting to add to the eerie effect.”

If that wasn’t disturbing enough, Rowan will recreate Buffalo Bill’s dance scene to the Q Lazzarus song “Goodbye Horses,” in a set that includes a vintage Singer sewing machine similar to the one the character uses to construct his human skin suits, along with a disco ball, a set of mannequins, and the ever-important full-length mirror.

Anyone who has never seen The Silence of the Lambs should know that Buffalo Bill’s character has undergone some serious re-examining because of how the depiction represents trans people, mostly due to the very revealing dance scene. As one 2021 Vox article points out, the movie "drew sustained criticism from LGBTQ+ people and advocacy groups for its depiction of Buffalo Bill," including a protest on Oscar night — during which the film won multiple awards, including Best Picture  — that resulted in the arrests of 10 people. With that in mind, hopefully, Rowan’s take will approach the recreation with some level of sensitivity.

Guests can also view The Silence of the Lambs memorabilia on display throughout the home, including an original copy of the production blueprints of the house, a call sheet that was issued to the cast and crew, and two pieces of wallpaper used on screen in the film.

Need to decompress after all the creepy shenanigans? Visit the upstairs attic aka Buffalo Bill’s Playhouse, a "full retro-inspired game room" that features a large-screen TV and over 400 decade-spanning films on DVD and VHS, a selection of full-sized arcade video games, and a flippable table with both air hockey and pool.
Buffalo Bill's House. 8 Circle St., Perryopolis. buffalobillshouse.com