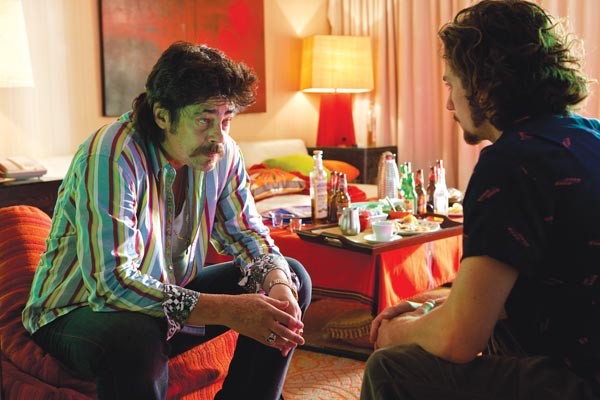 In English, and some Spanish, with subtitles

It's been a while since we've spent time with the flashy side of director Oliver Stone. But the razzle-dazzle is back in Savages, a fast-paced, darkly comic thriller that trots out sex, drugs and severed heads, in a narrative propelled by music-video-style gimmicks.

Savages, adapted from Don Winslow's novel, is a pulpy ride into the darker corners of the drug business. But first we meet our weed-slingin' American "heroes," currently chillin' in Laguna Beach, Calif. Chon (Taylor Kitsch) is an angry Iraq war vet, while his business partner Ben (Aaron Johnson) is a benevolent Buddhist. Together, they produce some killer primo, and share a girlfriend, a breezy bikini-ed rich girl (Blake Lively).

But a Mexican cartel comes a-knockin' at their sunny Shangri La, and, as the kids say, shit gets real. Ben and Chon's relationship with the cartel escalates from tense meetings and deadlines to explosions, double-crosses and assorted murders — on both sides of the border, and from both parties. (At different points, each side dismisses the other as animalistic "savages.")

The three leads are beach-ready attractive, but the best work comes from the sleazier side players. Benicio Del Toro portrays the cartel's enforcer, an angel of death in a gardener's truck. Del Toro, despite his silly 'stache and a poodle do, is riveting as a man who loves his job's casual violence and its strategic maneuvering. Also playing the angles is a federal agent, captured in another deliciously hammy performance from John Travolta. As the cartel's madrina — godmother — Salma Hayek rounds out this deadly dance card.

In all this, we're supposed to parse out the good and bad sides of the drug biz, but the moral relativism of Savages is pretty muddled, and too many emotional cheats are employed. It's the money that changes everything, but Stone gives both sides loopholes involving saving family members. And the final reel is a real groaner, a fantasia of justice.

Until then, Savages is entertaining popcorn fare — unless, for you as for me, this summer's high point of this summer is the return of Breaking Bad. Years ago, who would have predicted we'd be comparing a high-profile, big-budget film unfavorably with a TV show? But for all Stone's bona fides and bags of cash, Breaking Bad covers almost exactly the same turf — small-scale drug producers with a premium product who attract the cartel and lose their souls — with considerably more depth and skill. Savages seems late to the party, and cheesily dressed. But that's the thing about product, be it drugs or entertainment: There's always something new — and shattering — coming down the pike.