If any of our descendants are reading this in the future, be it known that we would find having a restaurant named after us a fitting tribute. We don’t know what it would be called, but since there are two of us, the name probably wouldn’t be as, well, sassy as Sassy Marie’s. But then, we probably are not as sassy as Marie, who owned a speakeasy in the 1920s and sang in an all-girl band. In the new restaurant, opened by Marie’s granddaughter in the space long occupied by James Street Tavern, on the North Side, candlelight flickers elegantly on black tablecloths draped over white — a distinctive touch — but the ambience is casual. On weekends, there’s live music in the speakeasy downstairs.

We arrived on a weeknight and sat upstairs. We were so eager to order the Gourmet Kettle Chips Platter, we didn’t even wait for our water glasses to arrive. This magnificent mutation of nachos and stuffed potato skins combines thick but crisply browned, freshly cooked Yukon Gold potato chips with a velvety Monterey jack sauce, scallions, ripe tomato chunks, bacon, and — because one cheese is not enough — what appeared to be half a pound of bleu cheese chunks. While this might sound like overkill — and it did appear almost intimidating — it was actually well balanced, with the chips doing a superb job of supporting their ample loads.

Less balanced was Jason’s boneless ribeye with chipotle chimichurri, in which the intensely smoky flavor of the sauce nearly overwhelmed the steak. This was a shame, because the meat was beautifully cooked, and the sauce was richly flavored. But the thick slather was better suited to hiding a poor cut of beef than highlighting a high-quality one.

A dining companion’s double-cut pork chop with apple-butter barbecue sauce negotiated the meat/sauce ratio much better, thanks in large part to a thick chop so moist and delicious that we double-checked to make certain it wasn’t tenderloin. Meanwhile, the sauce was a fairly traditional thick, sweet barbecue, subtly lightened and brightened by its fruity special ingredient.

Cioppino was a seafood stew that Angelique found simply “OK.” It included plenty of shrimp, scallops, mussels and chunks of an unidentified fish, along with julienned peppers — mostly the sweet red variety — in a garlicky tomato sauce. But, disappointingly, it was not spicy, as advertised, and the “crostini” were really three thick slices of soft white bread that grew soggier, and less appetizing, the longer they soaked in the sauce.

Still reeling from the kettle chips, we were on the fence about ordering dessert until we learned that Marie’s has an in-house pastry chef. With heroic determination, we faced the dessert list. In bourbon-vanilla bread pudding, the same unremarkable bread that did so little for Angelique’s cioppino was a superb foil for the rich custard and the syrupy flavors and textures of the pudding; it tasted like the most decadent French toast ever prepared. Monolith cake — a chocolate wedge served upright like the mysterious obelisk in 2001: A Space Odyssey — inspired Angelique to take up her fork and demolish it. She enjoyed its firm but moist crumb, fudgy icing and the raspberry coulis drizzled atop and around it.

Dinner at Sassy Marie’s was an uneven affair bracketed by inspired appetizers and desserts. We left stuffed and thinking that, next time, we might just jump straight from starter to finish. 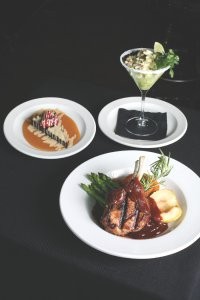