“It just opened up this taboo subject.”

In the U.S., “prosecuterix” is a little-used term for a female prosecutor. In India, a prosecuterix is a woman who alleges someone has raped her.

Prosecuterix is also artist Sarika Goulatia’s project highlighting stories of sexual assault and exploring the taboo surrounding them. Sparked by a traumatic incident from her own childhood in India — when she was 10, a man on a crowded city bus took her on his lap, and then put his hands under her underwear — she devised a way to let people tell such stories anonymously.

Goulatia solicits the stories, prints them out and places them in shoeboxes, traditional vessels for keepsakes and secrets. The boxes are wrapped in white paper, each illustrated with a digitally altered sketch of a random person found online; a quote from an assault victim; and a quote from a victim-blamer or rape apologist. The images and quotes, provocatively, are unrelated to either each other or the story inside.

Goulatia conceived of Prosecuterix several years ago, but she says the project “took on a life of its own” after Americans elected president a man who’s boasted of committing sexual assault. Prosecuterix debuted in May as part of DIGS — Sexism in the Arts, a group show at Artists Image Resource, where many visitors — especially millennials, says Goulatia — opened the boxes to read the stories (which are also accessible via QR code). “It just opened up this taboo subject,” she says.

Last month, Prosecuterix reopened as a solo exhibit at the Carlow University Art Gallery at the request of art-history professor Sylvia Rhor. Last week, about 40 boxes sat piled on tables in the stark white space. Stories are solicited via a drop box in the gallery or at prosecuterix@gmail.com. (Participants can request that their stories remain unpublished or placed in sealed boxes, or can even contribute a blank page.) One patricipant who was raped by a neighbor wrote: “I felt like it was all my fault, and I was worthless.”

Rhor says that when visitors open the boxes they go “inside” the experience, and that the disconnect between the stories, quotes and images requires people to question their assumptions about sexual assault. “It really asks you to think on so many different levels,” she says.

The gallery is open noon to 3 p.m. Monday through Friday, and by appointment at by emailing here. 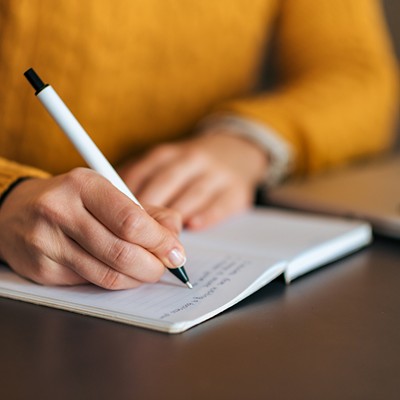