Sarah Marince: Never underestimate the power of a determined woman

When you know what you want, the unbelievable happens 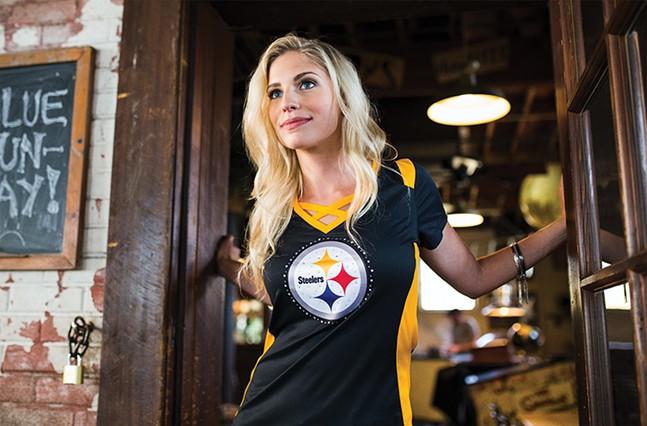 Even over the phone, Pittsburgh-born singer Sarah Marince's voice comes through strong and clear. When City Paper reached her, she'd just gotten out of an appointment and voice-acting work to get to in her home recording studio in Orlando, but she was able to find a few minutes to chat.

If her name doesn’t ring a bell, her face and voice certainly should. Marince was “the Eat’n Park girl” who sang the national anthem before Penguins, Steelers, and Pirates games. But since becoming Pittsburgh-famous by pitching for “the place for smiles,” she's branched out into country music, modeling, television hosting, and that voice-over work.

Marince has the voluminous blonde hair, big blue eyes, and gleaming white smile that embody the gold standard of beauty in America. It’s tempting to assume that, as a result, her path to success has been smooth, with little-to-no effort. That's not the case.

From a young age, Marince knew she wanted to work in entertainment. Her mother still has a picture of a 2-year-old girl holding a giant microphone and flaunting a pair of headphones. Hearing her own voice through speakers inspired a passion for performing that's sustained her to this day. As she put it, she “had no choice.” Her rocker parents, Gary and Mary Kay Marince, met while working at WDVE-FM. Gary’s work as a programmer meant the radio was constantly playing at home or in the car.

“I was strongly influenced by the voices I heard coming through the speakers,” explains his daughter. “Not just the music, but the advertisements as well.”

A meeting with her idol, Martina McBride, helped clarify what she wanted from life.

“Follow your dreams,” Marince recalls McBride saying. “Don’t let anyone ever tell you not to move to Nashville, that you’re not good enough.” During her senior year at Lincoln Park Performing Arts Charter School in Beaver County, Marince traveled between Pittsburgh and Nashville to work on her debut EP.

Marince lived on her own in Nashville after graduation. The juggling act she seems to have mastered was then in its early stages. Her days began with 6 a.m. shifts at Panera Bread, leaving afternoons and evenings to write songs, perform, and network. A couple of her songs, “In The Meantime” and “Can’t A Girl Change Her Mind” charted on Billboard, providing opportunities to open for the likes of Taylor Swift, Kenny Chesney, McBride, and even Pete Townshend.

“Everything I did [in Nashville] led me to where I am now,” she says “I’m so thankful for that time [there].”

The move to Orlando two years ago was calculated, and shows her maturation from that young girl who only wanted to hear her voice coming out of speakers. Marince eyed “the City Beautiful” instead of “the Music City” because Orlando provided a broader base for entertainment than Nashville.

She still sings, having accepted vocal gigs at various Disney theme parks. Anyone who has been to one of the parks in the U.S. or overseas likely has heard her voice during a parade or a show. But while singing remains a “first love,” Marince concedes to having eyes for television. You might have seen her on HSN, for which she is a product host, or noticed her Labor Day on the field at Camping World Stadium during ESPN’s broadcast of an Alabama-Louisville college football game. You might see her in another commercial, this one for a baby product (she plays the young mother). TV calls to Marince now like hearing her voice did once upon a time.

“The adrenaline rush is my favorite part,” she says. “There’s four or five cameras, someone in your ear, and a teleprompter. Whether you have 10, 15, or 20 minutes, when that’s done, it feels like it was a minute.”