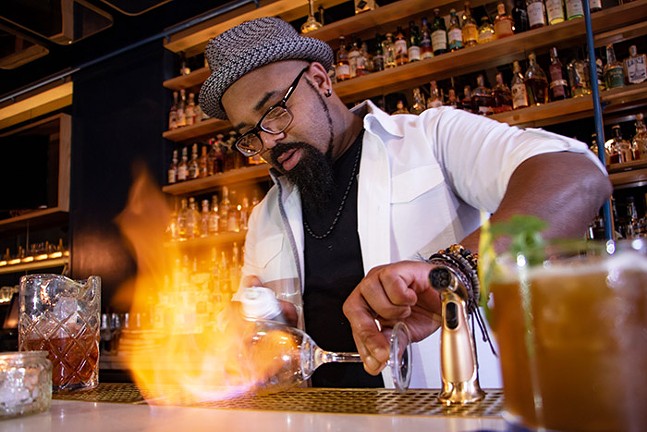 You’re probably thinking, "What exactly is a shake-off?" It’s a contest between some of the city’s best bartenders. Think of it like a beer fest, but instead of beer, there’s gin, vodka, rum, and whiskey.

CP illustration: Josie Norton
16 of Pittsburgh’s best bartenders (divided into four rounds) will be given a basket featuring a spirit and mystery ingredient. In 30 minutes, they’ll have to create an original cocktail, using their spirit, mystery ingredient, and anything available on the supply table. It’s our version of Iron Chef America, with cocktails instead of food.

Now you’re wondering, "Where do I fit into this?" To taste, of course! We’re relying on you to choose the best cocktail out of all 16 creations. In addition to preparing drinks for the panel of judges (consisting of members from the Pittsburgh chapter of the United States Bartenders' Guild and City Paper food and drink writer Maggie Weaver), each bartender will be required to batch out their drink for you to try and help choose a People’s Choice champion.

Tastings for People’s Choice will go from “first shake” (7 p.m.) to the final round. While your favorite neighborhood bartender shakes and stirs their drinks, you can sip, play games, peruse local vendors, and more. DJ TJ Harris will be providing music, and keep an eye out for surprise guests and appearances!

And if you don’t drink, don’t worry. Empath sober bar and social club, will be on site with mocktails, along with food from The Fluted Mushroom.

What’s in it for the bartenders? Each winner will receive a cash prize, bragging rights, and perhaps most importantly, a ridiculously awesome Champion Belt.