Eight years ago, we dined at Sakura Teppanyaki & Sushi, a Japanese restaurant with more home-style offerings than was typical at the time. The name remains the same, but Sakura’s appeal has significantly shifted. As the market for authentic Chinese — as opposed to Chinese-American — food has grown, Sakura’s Chinese owners have greatly extended the menu, focusing on dishes from Xi’an, the ancient capital that formed the terminus of the Silk Road.

Underrepresented historically in the States and still locally, Xi’an cooking is distinct from more familiar Sichuan and Cantonese styles. It features more lamb, less pork (due to Xi’an’s significant Muslim population), and spices, like cumin, that look westward. The cuisine is unique among Chinese and other East Asian styles.

Sakura’s Xi’an dishes are a bit heartier, with more root vegetables and robust sauces, resembling but quite distinct from familiar Chinese stir-fries. Indeed, when hand-shaved noodles with pork arrived, Angelique feared that this was yet another tired stir-fry with miniature corn and glossy brown sauce, but she could hardly have been more wrong. The sauce was nutty and creamy, faintly evocative of satay, while the rustic noodles, about the same size and shape as the strips of pork, were thick and chewy, and reminiscent of spätzle. 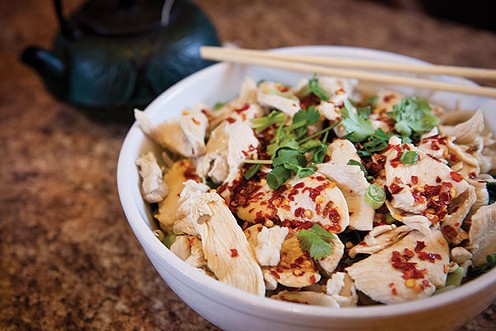 Dumplings — an extraordinary value at $5.95 for a dozen — also looked familiar, but the beef filling was meat-forward with appropriate spices, making these dumplings definitively different from the usual pork potstickers. We only wished the dipping sauce stood out more. Scallion pancakes were beautifully browned and flaky on the outside, but the interior was a bit gummy and lacking in enough scallions to brighten the flavor of simple fried dough.

Sakura also offers street-food-style snacks, such as a BBQ-pork sandwich on a steamed bun and the “Eight Treasure” spicy sandwich. The former was satisfactory, but the latter was amazing. The “bread” was described as a pancake, but seemed actually to be noodles packed together to form a cohesive mass and then griddled in oil. The surface browned deeply, with threads of noodle crisping up like hash browns. The cake was then split and filled with spiced meat, root vegetables and mushrooms, all diced and delicious. We have had nothing else like it in the city and will be thinking of it all winter.

On the noodle side of the menu, Angelique experienced some frustration. Her perennial complaint about Chinese restaurants is the paucity of their menu descriptions: From dishes named after two ingredients, how are we to predict their flavor and preparation? In the current instance, was there a meaningful difference between “Lamb Ribs Thin Noodles (Spicy)” and “Thin Lamb Noodles (Spicy)”, other that the former was made with lamb rib? She decided to take a chance on the ribs, but when they were out, defaulted to the latter dish. A cursory note on the menu characterized it as a stir-fry, but what arrived was a steaming bowl of soup, paprika-red in color, with a slick of red-chili oil on top. It was filled with small diced bits of lamb, carrot and rustic strips of noodle.

We quickly diagnosed this as the wrong dish. This must surely be “Minced Lamb Soup (Spicy): homemade noodle, lamb, carrots and radish in spicy broth,” a little farther down the menu. But no. The owner said we weren’t the first to be confused, but added that Chinese customers would not identify this dish as “soup.” Graciously, she asked us for advice on how to reword the menu.

This “soup” was no stir-fry as we understand the term, but it was pretty good. Once the oil was stirred into the broth, its spice suffused the liquid without overpowering heat, and the fillings took on another dimension, with a rich mouthfeel from the fatty oil.


Pork belly with woodear mushroom held no such drama. The pork looked like short slices of bacon, but it was chewy, not crispy, while large, thin slices of potato were only just cooked, remaining a bit crisp. Silky mushroom and firm, smoky tofu rounded out the primary elements. The ingredients were stir-fried with hardly any sauce, just spices and enough oil to hold things together.

We love this new era of authentic (and new to us) Chinese cuisine, even if it comes with some of the old pitfalls, including an epic menu with descriptions so incomplete as to reveal nothing. In addition to Xi’an and Japanese, Sakura offers an array of Chinese-American dishes as well as some Sichuan specialties. But it’s the Xi’an that will keep us coming back for more, even if we have to guess at the gap between menu and plate.