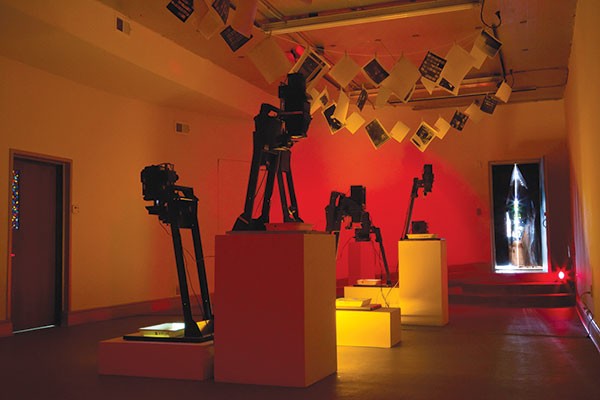 continues through the May 3 closing reception.

Darkrooms are isolated and self-contained spaces, places where time and light operate under special rules. Entering Dennis Childers and Nick Childers' installation Safe Light, there is a noticeable change in temperature, a low hum. Red and amber safelights, which allow photographers to work with light-sensitive paper, illuminate curling vintage prints hanging from clotheslines. Darkroom timers are plugged into one another recursively.  Six photographic enlargers are the focus of the room: Tiny projectors fixed inside their bellows project video onto sheets of paper floating in developing trays — short films made over the years by both artists, who are father and son.

But the Safe Light installation, and the photographs that complement it in the adjacent room at the Irma Freeman Center, are not just a nostalgic homage to increasingly rare technologies. The stuff of black-and-white wet printing has been rearranged according to an unexpected logic, and to powerful effect. The work challenges the popular notion that analog and digital photography are incompatible or oppositional media. iPhone photos hang alongside inkjet prints made from film negatives; color is selectively dropped into black-and-white images.

Photographs excite the memory, even as they are the artifacts of artists making sense of their environment. Safe Light is particularly well attuned to the ways in which photographs function as both records and as constructions. The images are mostly modest, small observations. Many were made in Pittsburgh, where Dennis Childers has been a part of the arts community for decades, and in New York, where Nick Childers now lives. Unassuming as they are, the pictures are all interventions, notes on these surroundings. They embrace the plasticity of photography, whether in the way the ink looks on paper, or in the use of panoramas and color.

And while Safe Light deals with all of these ideas both intuitively and deliberately, it also does so intimately. Safe Light feels like going inside someone's head — or two people's heads — and it is as much about the process of making memories as it is about the specific subjects that the works represent. Remembrance and possibility intersect in the Childers' dream of a darkroom where their movements through the world are reconstructed in a place of safety.