A passable, if predictable romance is interrupted by a cheesy thriller 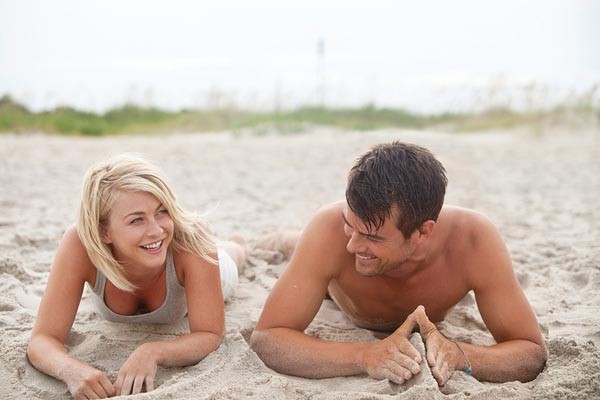 Before the dawn of digital reproduction, there was a phenomenon in which the more you copied and re-copied something, the paler and fuzzier it became. Such is Safe Haven, the latest film adapted from a Nicholas Sparks novel. Sparks' biggest book-to-screen hit, The Notebook (2004), has come and gone, and all we're left with is increasingly hollow imitators.

In this latest, directed by Lasse Halsström, all the familiar elements are there: the North Carolina beach town; the protagonist with a secret; the other protagonist, somewhat wounded; a helpful older person; cute kids; and outdoor canoodling (rain optional).

Katie (Julianne Hough) is on the run, and the worst bus route ever between Boston and Atlanta drops her off in a town on the Carolina coast. It's a nice place, and that includes a dreamy young widower (and dad of two), Alex (Josh Duhamel).

But Sparks tries to juice the story up with a Sleeping With the Enemy-type subplot, and this proves a clunky misstep. The first half of this film isn't that bad if you're just looking for a low-key, by-the-numbers romance. But once the cartoonishly ridiculous villain — red-eyed, shaking, sweaty — is added, this film sails straight into a Storm of Ridiculousness. The final reel has about five near-death scenes. By my count, not much of a "haven."