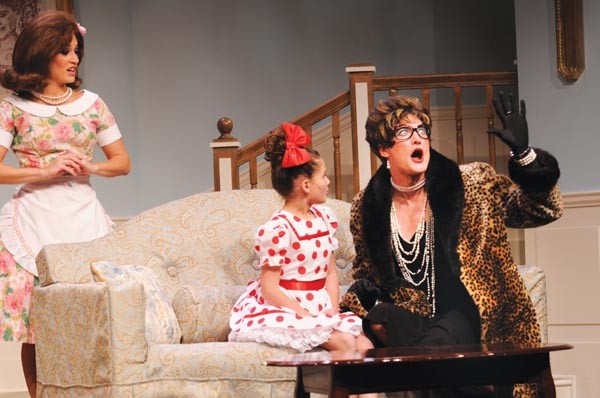 What would you do for a part in a play? In the case of Tina Denmark, an adorable 8-year-old, the question is really: "What wouldn't you do?"

And that's the dramatic fuel which fires Pittsburgh CLO's production of Ruthless! The Musical, featuring music by Marvin Laird and book and lyrics by Joel Paley.

Tina's school is presenting Pippi in Tahiti, and it looks like Tina's been cast as Puddles — Pippi's dog! But this pint-sized Lady Macbeth isn't about to be anyone's supporting player, least of all the no-talent Louise Lerman, who's playing Pippi. So Tina hatches an evil plan, much to the horror of her quintessentially suburban mother, Judy, and the delight of her conniving manager, Sylvia St. Croix.

Ruthless! plays this over-the-top comedy for everything it's worth, with outrageous jokes and can-you-believe-it complications. But there's also another show running underneath: an amazingly written parody of The Bad Seed, All About Eve, Gypsy, Valley of the Dolls, The Women, Mame and about a million more. The show lampoons musicals, backstage musicals and even musicals about backstage musicals.

Many moons ago, I appeared in the Pittsburgh premiere of Ruthless! and charting the audiences' reaction was always a trip. Regular audiences would laugh it up at the campy, loopy comedy of Tina's story, but there'd be pockets of theater people hooting away at all the brilliantly mashed-up show-biz inside jokes.

The CLO production, with solid direction by Van Caplan, is sure to please both crowds, with big help from a terrific ensemble: Kristiann Menotiades and Courtney Bassett make the desperation of their characters just about the funniest thing going. Kara Mikula sings Lita Encore with the perfect brassy, Broadway belt and steals the show with "I Hate Musicals" — the show's best song. Jonathan Visser's Sylvia St. Croix is all arched eye-brows and Norma Desmond posturing ... and turns the simple act of sitting in a low-slung chair into a piece of comedy genius. It doesn't get more adorable than Allison Joyce playing little Tina, but better still are the murderous glares she gives the audience. Meanwhile, the role of Judy takes quite a journey through the show, and Marlana Dunn does a great job riding the twists and turns to the unbelievable finale.

Kaplan's pacing is, perhaps, a little too fast. That's something I rarely ever complain about, but the jokes need a little room to breathe rather than this slightly rushed treatment. But there's no question that, as the run progresses, this fun cast will find its own rhythm.

Ruthless! is to die for.