“The lighter it looks, the more power it takes to perform.” 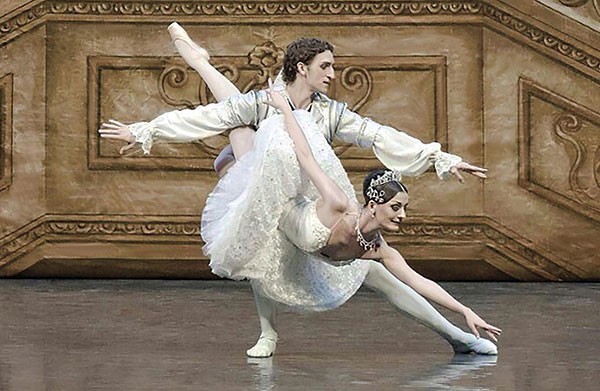 Founded in 1996, the classical ballet troupe, led by ballet master and Honored Artist of Russia Vladimir Troshchenko, has performed around the globe, including in China, Spain, Mexico, Italy and Germany.
For its two-and-a-half-hour full-length production of Sleeping Beauty, set to music by Tchaikovsky, the company brings some 50 dancers from ballet academies and troupes in Russia and Ukraine. The familiar, family-friendly ballet tells the story of the beautiful princess Aurora, cursed to wait in a slumber for true love’s kiss to awaken her from an evil spell.

Dancing the role of Aurora is Olga Kifyak, a National Opera House of Ukraine star and Honored Artist of Ukraine. In an email interview, Kifyak says of the role: “Your technique has to be very strong, and your acting skills have to be immaculate. You have to make the audience believe that Aurora is a very young girl, and that she is shy and modest as well as a princess. The dancing has to look light and effortless ... and the lighter it looks, the more power it takes to perform.”

Kifyak, who boasts 11 international dance awards including a bronze medal at the 2002 Serge Lifar International Ballet Competition, will partner with fellow Honored Artist of Ukraine and Lviv National Opera dancer Evgeny Svetlitsa, as Prince Désiré. Kifyak describes Svetlitsa as a dance partner in whom she has total confidence. “We understand each other, often with no words … needed,” writes Kifyak. “In ballet circles it is called ‘dance-togetherness’ (stancovannost).”

Like many touring-only troupes, RGB performs almost every day in a different city. That can be challenging physically. “Of course, the tension is there, since you have to dance each show and do it at 100 percent [even though] the body doesn’t have enough time to rest fully,” writes Kifyak. “But most important is to have the audience leave the theater at the end of the show in a great mood.”