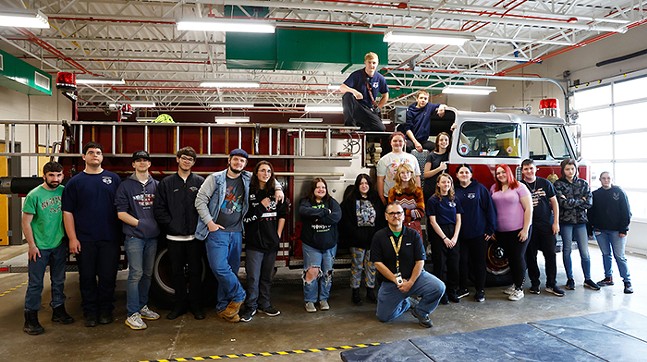 CP Photo: Jared Wickerham
Connellsville Area Career & Technical Center Protective Services students pose for a group photo with their teacher, Ron Barry, on Tue., May 17, 2022 in Connellsville, Pa.
For the most part, Pennsylvania’s firefighter and emergency medical technician shortages have become more dire each year. Almost all (96.8%) of the commonwealth’s firefighters are volunteers, and their numbers have been dwindling for decades. But about an hour south of Pittsburgh in Fayette County, a training program is working to help fill the gap.

Public officials first started sounding the alarm that Pennsylvanians, especially those “living outside of cities,” have “woefully inadequate” protection from fire and other emergencies, according to a 1976 report from the Governor’s Commission on Fire Prevention and Control. At that time, the state had 300,000 volunteer firefighters; in 2018, Pennsylvania had 38,000. (Fire companies are not required to report active personnel numbers, so it’s not clear how the pandemic has influenced the size of the state’s volunteer firefighter population.)

CP Photo: Jared Wickerham
Connellsville Area Career & Technical Center students Garrett Shearer (left) and Leland Hollis (right) in the Protective Services program pose for a photo with their teacher, Ron Barry (middle), inside the classroom.
Pa. EMS providers say they can’t find enough paramedics or EMTs, and, as Jerry Schramm, director of operations for Lancaster EMS, told PennLive in November 2021, “things are frayed close to the point of collapse.” According to the National Rural Health Association, a lack of qualified EMT applicants is “universal” in rural areas, due to, among other conditions, low and aging populations, fewer qualifying ambulance trips that would allow trainees to earn emergency certifications, and tough economic conditions.

Fire Chief Ron Barry’s protective services program at Connelsville Area Career and Technical Center in Fayette County is one of many local training programs stepping in to address this personnel crisis, recruiting and training high school students to become the next generation of firefighters and EMTs.

Fifteen minutes into visiting Barry’s class, a student from another program arrives with an injury he got roughhousing with his brother. Since Barry is a veteran paramedic, teachers send injured students his way when there isn’t a nurse in the building.

Chief Barry and his books
Ron Barry has been a volunteer firefighter for most of his life. At 16, he successfully petitioned the local VFD to start a junior firefighter program and was among the first to sign up. At 52, this is his seventh year as chief of the South Brownsville Fire Company #1, and he has been training future volunteer firefighters, EMTs, and law enforcement in Fayette County at Connelsville Area Career and Technical Center’s protective services program for 14 years.

He’s also a published author. His first novel, Jobtown, is about a hometown firefighter rising through the ranks of the fire department and was inspired by Barry’s own hometown, Brownsville, Pa. His current project is a children’s book, Six Brave Firefighters and Captain McGurk, which chronicles, in verse, a day in the life of a team of firefighters as they put out a fire and rescue a cat. Crafting the book’s characters, it was important to Barry that the firefighters be of differing races, nationalities, and genders.

“It promotes diversity,” Barry says of the book. “It shows that anybody can be a firefighter.”
“A lot of times, the kids jump right in because they’re trained, and they know what to do,” Barry says, noting that his students are required to become CPR and first aid certified. Barry recommends an 18-year-old junior named Harleigh to wrap the injured party’s wrist.

“This is an industrial school. Accidents happen, kids cut themselves. Culinary, they work with knives; welding, they burn themselves. So, we’re prepared for anything,” Barry says.

Barry’s “shop,” as students call each of Connelsville’s 13 programs, has industry-standard equipment students train on, such as a 911 dispatch station, a fleet of emergency vehicles including a fire engine, a fire hydrant donated by the local water company, full PPE, and a 14-foot rappelling tower made by students from the school’s carpentry program. (Barry adds that masonry students poured its concrete base, and welding students bolted it to the wall.)

Each year, students practice evacuating a burning building using a digital fire simulator that creates harmless special effects smoke so they can safely train in zero visibility conditions. They suit up in full firefighting gear, including self-contained breathing apparatuses, and are also graded on their ability to don their PPE in two minutes or less. The fire simulator has a digital LCD TV screen with a digital flame and the TV is designed so you can blast it with a fire hose and the flame reacts to the water, according to Barry.

“I can make it flare up again,” he says. “I can make more smoke, I can change the fire class from ordinary combustibles to flammable liquids to electrical with sound effects that match.” 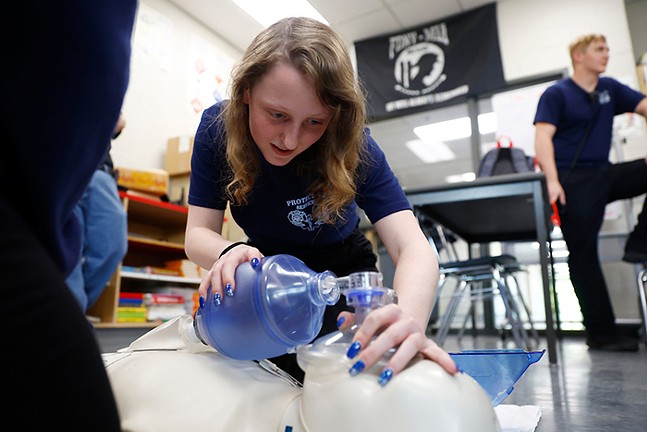 CP Photo: Jared Wickerham
Connellsville Area Career & Technical Center student Hannah Upton runs through a mock scenario as part of the Protective Services program inside the classroom.
A student pops into the supply room to notify Barry that the kid with the wrapped wrist has numb fingers. Barry returns to the classroom and recognizes the patient.

“Oh, so you’re Patrick's brother,” he says. “You guys have a terrible history with hands.” “We do,” the student agrees.

After looking over the hand, Barry sends a student for an ice pack.

“Should we splint the fingers?” “It’s swollen.” “Yeah, look at the side of his hand.” Concerned students look on as the group reviews their observations after examining him.

“I told him to straighten his hand a little bit and he was fine and then, once his hand was straight, I put my two fingers on with Harleigh’s help, and he was able to put pressure back at me,” says Garrett, a 15-year-old volunteer firefighter with the Springfield Township Volunteer Hose Company, who’s planning to enlist in the military after high school.

CP Photo: Jared Wickerham
Connellsville Area Career & Technical Center student Garrett Shearer in the Protective Services program removes his firefighting uniform inside the classroom.
When it comes to recruitment, Barry does more than his fair share to engage potential students.

“Being a fire chief, we need volunteer firefighters so badly,” he says. Recruitment efforts sometimes begin during the annual summer camp he runs for middle schoolers interested in the high school protective services program. The summer camp is a key recruitment tool, according to Shawna Little, the workforce development coordinator at CACTC.

“I will tell you, the people that do middle school camps, their programs are full,” she says. “The ones that don't are hurting for kids.”

In addition to focusing on recruitment, Little says they’re trying overall to change the stigma of career and technical education, part of which is gender bias.

Close to Home
A recent agreement between Pittsburgh and the city’s firefighters’ union on residency requirements may improve their ability to attract firefighter applicants.

This decision also means that anyone who lives within 60 minutes of Downtown is permitted to apply to be a firefighter for the city.
Barry says that the girls he’s taught tend to be more interested in EMS than law enforcement, but “they like the forensics and CSI, too.”

Makayla, an 18-year-old senior planning to be an EMT, says that “a lot of people think that women can’t be EMTs or firefighters because we're small. There's a lot of lifting, but some women really get it done, and it's awesome.”

“I like helping people and I like that it’s fast-paced,” she says, adding that she also likes knowing that the demand for EMTs is high.

Fayette EMS, one of the protective services program’s industry partners, has hired every EMT graduate he’s ever sent them, according to Barry, who says he’s proud that CACTC has produced “quite a few volunteer firefighters, quite a few EMTs.”

“Every year,” Makayla says, “we get more and more girls, and it’s awesome to see how interested they are.”
Connelsville Area Career and Technical Center. casdfalcons.org