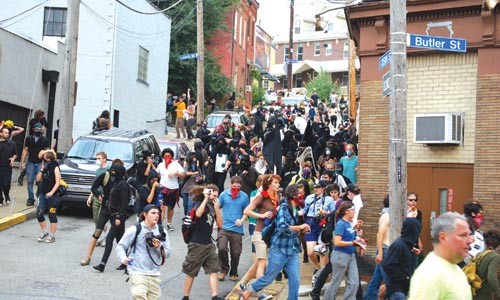 Two days after finishing their protests of the G-20 summit, activists crowded the sidewalk outside the Allegheny County Jail, shouting for the release of those still in prison from the previous days' arrests. Inside half a dozen cell windows, prisoners could be seen waving and flashing the lights on and off.

Below, some from the Pittsburgh G-20 Resistance Project -- the anti-authoritarians who were confronted by police during an unpermitted march Sept. 24 -- were talking victory.

"The goal was to disrupt the G-20," said Alex Bradley. For many of his fellow anarchists, "success meant staying on the streets as much as possible, staying unpredictable ... [and] fighting the battle of the story." Instead of showing glimpses of arriving summit officials, Bradley says, news outlets focused on live coverage of clouds of pepper spray, lines of police in riot gear and anarchists rolling Dumpsters toward high-tech police trucks.

But the organizers who played by the rules -- seeking permits for their protests -- were still trying to get their own views heard. Members of the Thomas Merton Center's loose coalition of progressives -- veterans of many past local protests -- had to file suit in federal court just to get a fraction of their requests for a chance to protest.

The city had muzzled them all summer long, with help from the local media and the federal government, which declared the G-20 a "National Security Special Event." That designation brings special security precautions with it.

Before the first group of activists had even met publicly to plan any protests, television and daily newspapers were full of speculation about what "protesters" would do. The press evoked past protests of international events elsewhere, airing speculation about feces-throwing by demonstrators.

As it turned out, no feces was thrown at any protest. But by then, city officials had delayed permit OKs, and promulgated new laws against protester tools and "noxious substances."

While the hype cited the danger posed by anarchists, none of the stall tactics seemed to hurt the Resistance Project's plans. Anarchists were, in fact, conspicuously quiet during the run-up to the summit. Instead, it was the Merton contingent who spent time vocally opposing the city. The pre-summit hysteria left them talking about their right to protest ... rather than the substance of their opposition to the G-20.

The permit struggle did bring some decent publicity to the cause, once the Merton Center held a well-advertised "emergency meeting" on Aug. 18. Prior to that gathering, only one mainstream media reporter, the Pittsburgh Post-Gazette's Sadie Gurman, had been at any Merton Center meetings; this time, the television cameras crowded the room. The "protesters" had turned from potential perps into First Amendment fighters.

Not that it made much difference.

By Sept. 8, Merton organizers were talking about how to get accountability for city actions after the fact. They had tried, and failed, to get city council to consider a resolution protecting protesters from law-enforcement excesses. They got even less traction from urging council to debate police rules of engagement before the event.

Concluded Nic Solic, who'd been organizing with several local pro-Palestinian groups: "The important thing is to get resolutions out there to the general public, so we have leverage when things fall apart." 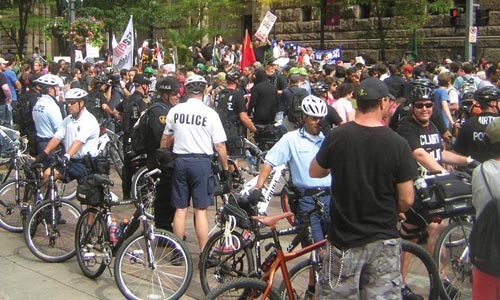 Lisa Cunningham
Police and protesters on Grant Street during a Sept. 25 demonstration

Despite such obstacles, many organizers feel they pulled off successful protests. After all, they say, a permitted march held on Sept. 25 was the city's largest in a generation. (That characterization is based on organizers' estimates that 8,000 people marched: Some media accounts estimate the crowd at closer to a quarter of that.)

"They can arrest some of us temporarily," said Pete Shell, co-chair of Merton's Anti-War Committee, while standing outside the county jail. "But they cannot arrest the message that we want to bring the troops home now from Iraq and Afghanistan, and we are opposed to the harmful G-20 policies that have contributed to the economic and environmental crisis."

"We, in two days, raised awareness of how the G-20 relates to the refugee crisis," says Francine Porter, who helped operate a Women's Tent City in Point State Park. Porter's group had gone to federal court seeking to occupy the park for five days; they got permission to stay just two. The tent city attracted just 60 passersby on the first day, Porter says, but more than 200 the next.

What's more, says Porter, "All of a sudden the story changed from our fight in federal court to why we were there." That gave demonstrators a chance to talk about "the wars in Iraq, Afghanistan and the occupation of Gaza, and how the U.S. is responsible for these imperialistic wars."

"Locally we were hoping that it would create ... some opportunity for outreach in the community," says Anti-War Committee co-chair Jessica Benner. But mostly, she says, the goal was "to strengthen our local connections in the social-justice community, while having an international message."

Similarly, the Resistance's Alex Bradley says, "Most of the value to me in all this is not spending a couple of hours fighting cops. It's three months of talking to my neighbors, going door-to-door, discussing alternatives, making fliers, talking to the media, presenting on panels. In the same way, for the G-20, the value for them is not spending a day-and-a-half in a room. It's the whole spectacle they are creating, which is designed to put in the public's mind the idea that they are allowed to determine the future."

The future of local organizing efforts is still being determined. While the Resistance's arrestees met privately to devise a legal strategy on Sept. 27, the Merton's Anti-War Committee gathered in another emergency session to respond to a slew of post-summit arrests. [See "Arrested Developments."]

"I'll do what I can to seek truth and accountability," said Naomi Archer, an organizer for Three Rivers Climate Convergence. The environmental-awareness group is already suing the city for harassment that violated the civil rights of group members. After the summer-long struggle, though, Archer doesn't expect things to get easier any time soon. Getting accountability from the city, she warned attendees at the Sept. 27 Merton Center gathering, "will take months of dedication to get the results we want."