Rubblebucket back on the road after singer's cancer diagnosis

"There's an aspect of the road that's incredibly healing." 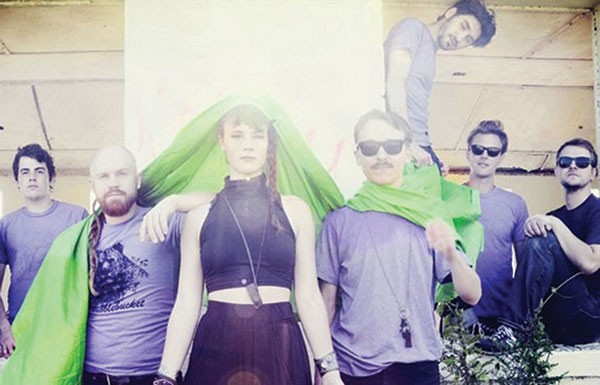 It's been an exciting year for Rubblebucket: The Brooklyn band, long toiling as an indie, signed with Communion Records over the summer, but it also put on the brakes a bit as singer Kalmia Traver was diagnosed with ovarian cancer. The group was back on the road in the fall, though; we talked with bandleader and trumpet player Alex Toth about Rubblebucket's whirlwind 2013.

You released an EP last month, Save Charlie, that sounds a bit different from your older material — more raw, honest. Is that indicative of what you've been working on for the next full-length?

Yeah, that was harvested from the material we've been working on. We still have wild, whimsical tastes and writing approaches, and we experiment with so many different processes as we're writing, so I don't think we've ever just stayed in one place.

Lyrically, some of the songs sound more personal than a lot of your older stuff.

I've written hordes of poetry for years, but ... it kind of ends up sounding like beat poetry or slam poetry — just really rhythmic, visceral poetry with really wild strings of words. I feel like we're getting better and better and sculpting that into clearer messages.

"Save Charlie" was harnessed from some personal things, trying to make it poetic and make it make sense. "Patriotic" came from a dream Kal had — "Patriotic" and "Six Hands" are both from dreams. That's something I admire about Kal: how vivid her dreams are. I have the most boring dreams: Things go wrong on stage; I'm in a rehearsal playing the same song for six hours. But she's, like, a bird, or she's in a waterfall that turns into a mermaid, or she's on the Trail of Tears, and being oppressed.

How is Kalmia doing on tour so soon after chemo?

We tried to make this tour a little more relaxed, and we rented a nicer van for the West Coast leg; she had a bed set up in the back and she got to sleep a lot. She's on what she calls the "Don't Die-et," which is all really healthy stuff, and every night in the hotel room she boils these medicinal mushrooms called chaga; there's tons of documentation on their cancer-fighting properties. There's an aspect of the road that's incredibly healing.

It must have hit you hard when she had her diagnosis, but you didn't have to cancel too many tour dates, right?

We'd been off the road most of the year because we were thinking of recording the album this fall. But then the other big news that happened simultaneously, as Kal was being diagnosed, was that we were getting signed to [Communion Music]. We'd been an unsigned, DIY band for our whole bandhood, and to have a resourceful, artist-friendly and well-connected label that totally gets us — it's a huge opportunity. Opening for Mumford & Sons, getting ready for this record, it's really a major-league thing.