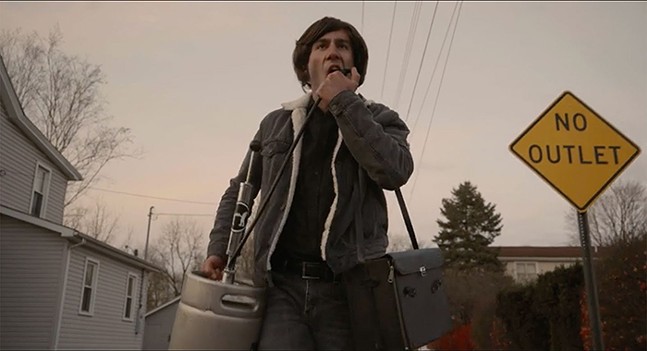 Row House Cinema
A "sweded" version of No Country for Old Men
Row House Cinema started its Sweded Film Festival four years ago, but it's arguably never been more relevant than today, since we're all stuck at home in the middle of winter. The festival of homemade "sweded" films, where participants cheaply recreate scenes from iconic movies, will debut on Fri., Feb. 12 online and at Row House's location in Lawrenceville, as well as at select theaters across the country.

The festival, whose complete name is The Sweded Film Festival for Creative Re-creations, takes its concept from the 2008 Michael Gondry movie Be Kind, Rewind, which stars Jack Black as a video rental store employee who accidentally erases the content of all the VHS tapes (it involves magnets), and films recreations of the movies himself.
Submissions for the film festival opened in November, and the final slate of homemade films includes "sweded" versions of Die Hard, No Country for Old Men, Stop Making Sense, and more. For the first time, the festival will play nationwide, with showings at the Bryn Mawr Film Institute in Bryn Mawr, Pa., as well as independent theaters in Minneapolis, San Francisco, Oklahoma City, and more. The films will also play virtually through Row House's Virtual Cinema program.

"It’s been an extraordinarily difficult year for independent movie exhibitors and for film fans, but we remain undaunted, and our Sweded Festival is a way to celebrate everything we love about movies,” said Row House owner Brian Mendelssohn in a press release. “The exuberance and immense creativity of the entrants is wonderful to see – silly, passionate, inspired and sometimes downright crazy.”

Eventually, a panel of judges will pick a winners from all the film entries to be awarded cash prizes.