Rough in the Diamond

Two thousand and nine: It's already being characterized as a year of historic failure. The worst economic skid since the Great Depression. The biggest housing collapse in decades. The largest Ponzi scheme ever.

Is there room left in these calamitous 12 months for ... the most inept franchise in professional sports?

Last year, the Pirates completed their 16th consecutive losing season, tying a record set by the Phillies between 1933 and 1948. If the Bucs end 2009 below .500, they'll take the title outright. It would be the longest stretch of losing seasons not just in baseball, but in all of American major-league team sports.

So if this is the era of Epic Fail, the Pirates could be the perfect symbol for our times. 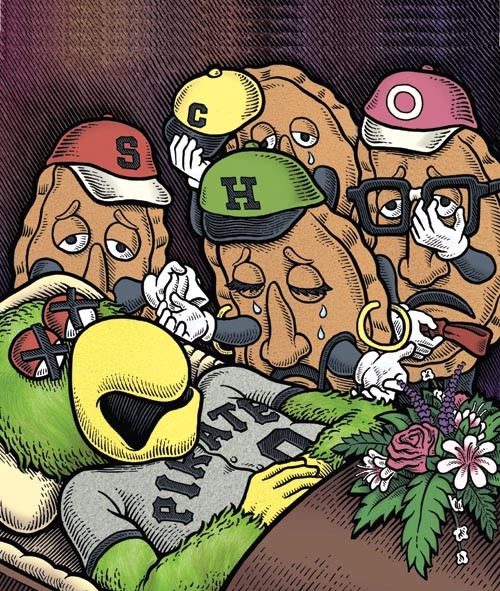 But is there hope for avoiding this ignominious entry in the record books? And if not, who should shoulder the blame?

For good or ill, the Buccos are returning with a lot of the same faces from 2008. In the infield, Jack Wilson is back for his ninth season. Third baseman Andy LaRoche's bat has shown signs of life in spring training -- but he's still living under the shadow of last year's dismal performance. Over at first base, Andy's brother Adam LaRoche is starting his third season for the Pirates.

Second baseman Freddy Sanchez told a Pittsburgh Post-Gazette reporter in March that "this is the best I've felt in spring training." But he'll have to overcome a season in which his batting average slipped to .271, just two years after he won the National League batting title.

So things don't look good. Baseball Prospectus, a sports-statistics journal, predicts the Pirates will finish 2009 at 63-99 -- four games below their 2008 performance.

"We're not optimistic," acknowledges Christina Kahrl, BP's managing editor. "They're just not a very good defensive ball club." And the Pirates have been broken for so long that it's "going to take a long time to fix."

(Our picks for the Pirates "Hall of Shame" can be found here.)

In September 2007, the Pirates axed general manager David Littlefield and replaced him with Neal Huntington. Kahrl has good words for some of Huntington's moves thus far -- including the trading of Xavier Nady and Jason Bay last year. But mostly, she sees Huntington's tenure as being, almost by necessity, an improvement.

"It would be hard to do worse than the way things were under Littlefield," she says. "They had to be one of the worst organizations."

Kahrl says that there is some light at the end of the long, dark tunnel, even if Pittsburgh won't reach it this year.

"I think they're pointed in the right direction," she says. In the outfield, Gold Glove centerfielder Nate McLouth -- who led the team in home runs and RBIs in 2008 -- is trying to build on his momentum from last year. But there's speculation he'll be shifted out of center once Andrew McCutchen, a top draft pick from 2005, is ready to step in.

"The sooner [the Pirates] get used to the idea that [McCutchen's] going to be in center, the better off they'll be," says Kahrl. In fact, "If a couple things break their way, I don't think it's impossible to suggest [a winning season by] 2010 or 2011."

Some observers, however, won't grant even that much optimism.

"It's been so long [since they had a winning season], I don't see it any time in the near future," says Sean Van Patten, an oddsmaker with Las Vegas Sports Consultants Inc., which has the Pirates pegged at 68 wins this year.

"They just don't have people in the line-up that you fear," Van Patten adds. He says he likes catcher Ryan Doumit -- whom the Pirates signed to a three-year deal after the 2008 season -- but stresses that the team "need[s] to try to rebuild some of their pitching."

"Pitching-wise, they just have guys that are either good one day or not."

In March, the Pirates sent starter Tom Gorzelanny back down to the minors to fix his throwing mechanics. Before the season, their five-man rotation was set, with Paul Maholm, Zach Duke, Ian Snell, Ross Ohlendorf and Jeff Karstens (who beat out fellow righty Virgil Vasquez in spring training).

Van Patten's own prediction for the Pirates in 2009 has them with two fewer wins than his company's official line. He says that season predictions are typically based "off the last couple of years" because baseball teams "don't really fluctuate" from year to year as much as teams in other sports.

There are reasons for that. In the 20th century, there was a "gradual, long-term trend toward greater competitive balance in MLB," writes Andrew Zimbalist in his 2003 book, May the Best Team Win: Baseball Economics and Public Policy. The progress was partly fueled, he writes, by "the introduction of the reverse-order draft in 1965" and "the advent of free agency in 1977." But that trend "seems to have been interrupted and reversed in the mid-1990s," with team performance becoming more stratified by payroll.

As evidence for these trends, Zimbalist, a professor of economics at Smith College (Northampton, Mass.), notes that "from 1995 through 2001, only four teams from the bottom half of payrolls reached the postseason." And they won only 5 out of 224 playoff games. Only once in the past 16 seasons has a team -- the 2003 Florida Marlins -- won the World Series with a payroll less than the Pirates'.

Not that Pirates ownership, led by Wheeling newspaper scion Bob Nutting, should be let off the hook. After all, in the seven seasons following 2001, 14 of the 56 playoff teams have been from the bottom half of the league. The Pirates, though, haven't experienced even that modest upswing. So far this millennium, they've yet to finish higher than fourth in their division. And their 2008 payroll was the league's third-smallest.

In an interview, Zimbalist says that the challenge for small-market teams should be "not so much being able to rise to the top, but once you've risen, how long you'll stay there." And after 16 seasons in which the Pirates have been nowhere close to the top, "One would have to conclude that management bears some responsibility." Teams like the Pirates are "disadvantaged," he says, "but they're not outcasts."

Zimbalist says payroll can account for only 20 to 25 percent of a team's performance. No matter a team's budget, "You ought to be able to assemble a winning team from time to time."

The Marlins are a good example. They've gone to the World Series twice during the Pirates' 16-year losing streak. After winning the championship in 1997, they cut their payroll by 30 percent and ended the next season at 54-108. But they were able to rebuild and by 2003, they were champions again. Last year, they were the major leagues' lowest-paying team, but they still finished with a winning season.

Meanwhile, the team with the second-lowest payroll last year was the Tampa Bay Rays -- and they ran all the way to the World Series, losing to the Phillies. This year, predicts Baseball Prospectus, the Rays will finish third in the American League East (behind the big-spending Yankees and Red Sox) with a 95-67 record.

With the 2003 publication of Moneyball: The Art of Winning an Unfair Game, author Michael Lewis showed how the Oakland Athletics (a team with a payroll comparable to the Pirates') snagged quality players by changing the way they evaluated talent. Lewis argued that teams could benefit from a statistics-driven evaluation of performance, rather than relying on subjective, gut-level assessments made by scouts.

The idea of searching for overlooked talent has created a wave of amateur statisticians across the country, fans who memorize once-obscure data like on-base and slugging percentages. And after reviewing Lewis' book, Pittsburgh Post-Gazette columnist Brian O'Neill began writing a weekly "Stats Geek" column, which took a number-crunching approach to assessing the Pirates. He retired the series four years later.

"It occurred to me late in the 2007 season that I seemed to care a lot more about this than the owners did," O'Neill says.

"There are two ways to make money in baseball," he adds. "One is to put a really good team on the field. The other is to just put a team on the field, not spend a lot of money, [and] get all the [shared] revenue money that is coming."

And sometimes focusing on the numbers can distract you from the team's real problems. By now, "there is a tendency for some people to misinterpret what Moneyball really said," says Ronald Cox -- an associate professor of political science at Florida International University and co-author of Free Agency and Competitive Balance in Baseball.

"I think what Moneyball was suggesting was: As an organization, you have to constantly shift the parameters of what you're focusing on," he adds. "What's the best value for our dollar this year?"

Cox blames the Pirates' past ineptitude on team management. "There's been a consistent pattern of dysfunction in the front office," he says. "They went for the middle-range players ... who are almost habitually overpaid."

If the Pirates are going to right the ship, Cox says, the Pirates (and their fans) will have to abandon any nostalgia for player continuity. Teams need to take an earnest evaluation of each player and pay him what he's worth, as opposed to say, dropping $60 million on a fan favorite like catcher Jason Kendall.

"Within that [business model], you've got to make very cold calculations," Cox adds. "You've got to really look at the value a particular player is going to produce for your franchise."

O'Neill says that the Pirates are finally investing in the minor leagues and development more than they have in the past. "[Littlefield's] biggest failure was in his drafting," O'Neill says. But, he says, "They did have a good draft last time." He points to the promise shown by McCutchen and 2008 pick-up Pedro Alvarez.

"Maybe this is the final year we have to ..." he says, before catching himself. "Actually, there's probably this year and next year" in which fans can expect losing seasons. "But it's possible that the nucleus of a good team is out there."