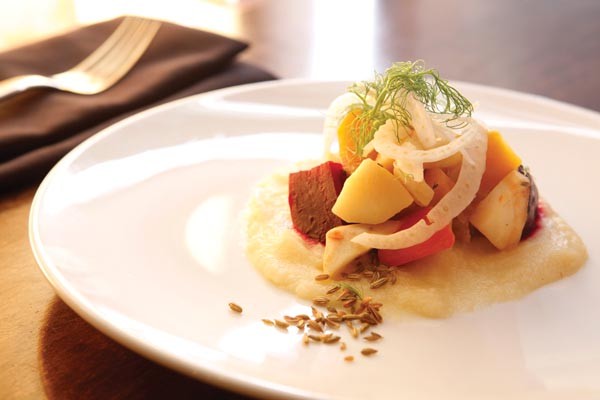 Photo by Heather Mull
Salad of roasted and puréed root vegetables, with fennel

Musicians know that there is an intimate, often intuitive, relationship between the art of music and the discipline of mathematics. Chefs know that the same is true for cooking: Precise portioning of ingredients, not to mention a detailed understanding of their properties, is required to balance the equation of a delicious meal.

Of late, there seems to be a numerological formula involved in simply naming a restaurant. Usually, it's a simple addition of name plus number, but occasionally, the algebra can veer into the arcane. Root 174 is a new hot spot in Regent Square's booming restaurant row whose name appears to hew to the formula, but is really more complex than it appears. Chef/owner Keith Fuller (formerly of Six Penn, an early adopter of this semiotic code) somehow realized that the sum of the two ZIP codes in the neighborhood forms a perfect square, and thus derived his establishment's name from their mathematical root.

And this playful, yet sophisticated, spirit of invention doesn't leave off there. The foundation of Root 174's menu is also a basic formula, in this case the golden triumvirate of fresh, local and seasonal ingredients. To this, Fuller has added a bold stroke with his adventurous selection of meat products, such as bone-marrow brûlée and smoked salmon sausage. But the real distinction on the brief, ever-changing menu is the lengthy, even baroque, ingredient lists. At first, it put us in mind of the early '90s culinary gambit of piling on random elements that might work, but weren't required to. But a closer examination revealed a lot of thought behind the complex combinations.

For example, a warm mushroom salad appetizer doubled down on earthy flavors by including both mushrooms and lentils. But the plump juiciness of the mushrooms contrasted well with tender-soft legumes, while leeks added zip, arugula peppery green-ness, and a cooked egg held it all together.

The aforementioned marrow brûlée, served with baguette slices, had an airy, cloud-like texture which contrasted with its buttery-rich flavor. There was a distinct sweetness, too, though the spread was not nearly as hearty as lardo, the traditional European pork-and-fat spread. It was more like a deceptively light and airy mousse, its caloric overload spun almost into froth, anchored by the toasted baguette and a small mound of peppery apple slaw.

Sausage is traditionally a product of fatty beef or pork, but in these health-conscious times, it's almost equally likely to be made of some kind of poultry. At Root 174, we encountered, for the first time, sausage made from fish. We were pretty sure hours over even a low flame would ruin a sausage made from fresh salmon, but Fuller sidestepped this peril by starting with salmon that's smoked. In the process, he opened a brilliant back door to slow-smoked flavor. Couscous and pea shoots -- or "tendrils" -- balanced the sausage's intense flavors with their own light ones. We could not detect the cocoa in the accompanying dollop of cocoa-cranberry jam, but its sweet-tart tang was nonetheless this dish's ideal counterpoint.

Slow-braised pork shank was served off the bone, over a rather busy plate of yam gnocchi, diced rutabaga and parsnip chips, among other ingredients. However, the root vegetables came in three distinct forms, ranging from pillowy dumpling through tender-crisp chunk to crisp chip. This was a clever -- and effective -- way to add interest to the classic medley of roasted roots. The mushrooms may not have added much, but that's a quibble. Overall the dish was a complete success, lengthy ingredient list and all.

Hoisin-barbecue chicken, with thin slices of breast meat and a whole leg, was only just moist, but with great char that came through sweet hoisin sauce. Sticky sushi rice, tossed with daikon and carrot and spiced with house-made kimchi, offered texture and flavor contrast, adding up to a harmonious whole.

Root 174 offered a tempting variety of desserts, but our autumn repast could only end with apple crisp. It was served in a shallow casserole dish, ensuring plenty of crisp-but-chewy topping with each tender, fruity bite. It also provided the surprise of the evening. At first we took its topping for a dollop of ice cream, but why wasn't it cold, or melting? Could it be whipped cream? No, not thick enough. It had body and richness, along with an intriguing flavor we couldn't quite identify. Finally, our server gave up the secret: The crisp was topped with sage cheesecake.

You don't have to do the math to figure out that this addition, as with so much else at Root 174, was brilliant.