Imagine having lived only in a 10-by-10-foot room, windowless except for a small skylight. Like 5-year-old Jack, you’d have a cozy familiarity with mundane objects, and an ease that each day would unfold like the last. But if you were Jack’s twentysomething mother, kidnapped and held captive in that same room for seven years, the confinement would be crushing, maddening and terrifying. 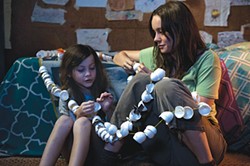 In Room, director Lenny Abrahamson adapts Emma Donoghue’s popular novel about such an imprisoned young mother and her son. The book told the story from Jack’s perspective, and Abrahamson mostly follows suit here; the child’s innocence and hopefulness gives this dark thriller a welcome buoyancy.

Inside the room, Ma (Brie Larson) has created a complete world for Jack, making the abnormal normal. She has told Jack (Jacob Tremblay) that there is nothing outside the room, that the whole world is all he sees before him. What little they watch on a TV is instructive only in that it shows “made-up story” things like other people and trees.

But as Jack gets older, his growing awareness is threatening the stability of this carefully cultivated artificial world. So Ma plans an escape, understanding that they will likely die trying, or die anyway.

This blend of adult tension and child wonderment is a tricky mix that Abrahamson manages beautifully, particularly in the scene when Jack escapes to find help. Wriggling out of his hiding place in the back of his captor’s pick-up, he’s awestruck by unimaginable expanse of blue sky moving above him. So Jack lays there rather than jump out as instructed. It’s incredibly fraught — jump! now! — but this entry into the world is joyous and worthy of stillness.

The second half of the film focuses on adjusting to life outside the room. For Jack, it is a fearful but increasingly exhilarating journey, as the present subsumes his incredibly limited past. But Ma is paralyzed by the past. In the room, Ma shaped circumstances to protect Jack, including keeping such volatile emotions as rage, fear and despair locked away; outside, the roles shift as it is Jack’s resilience that must support Ma.

Abrahamson made last year’s loopy delight Frank, which was also about somebody trying to bridge the distance between a comforting enclosed space and the messy outside world. (In Frank’s case, the protagonist preferred living inside a giant papier-maché head.) And like Frank, Room offers an off-kilter story that threatens to collapse into lurid melodrama, but for the two great performances from Larson and Tremblay that anchor it. Larson has done good work in smaller films, such as Short Term 12, but this break-out from the room is also a break-out performance.