Romeo and Juliet ballet at the Conservatory Dance Company

Cassidy Burk's brilliant Juliet alone was worth the price of admission

It's sometimes easy to forget that Point Park University's Conservatory Dance Company is a student troupe. The company so easily appears like a professional one in contemporary and modern dance works. In its latest production, Nicolas Petrov's Romeo and Juliet, the unforgiving nature of classical ballet technique was a reminder that CDC's dancers are indeed still students. Nonetheless, as a student production, the company's opening-night performance was solidly entertaining, with wonderful sets and colorful costumes.

Originally choreographed for Pittsburgh Ballet Theatre in 1971, Petrov's two-hour ballet in three acts is a traditional telling of Shakespeare's iconic tale of star-crossed lovers. Credited as the first Romeo and Juliet ballet in the U.S. to use Prokofiev's marvelously sweeping and romantic score, Petrov's choreography for it was nicely paced and dense, with lively, folk-influenced group dances and sword-play. 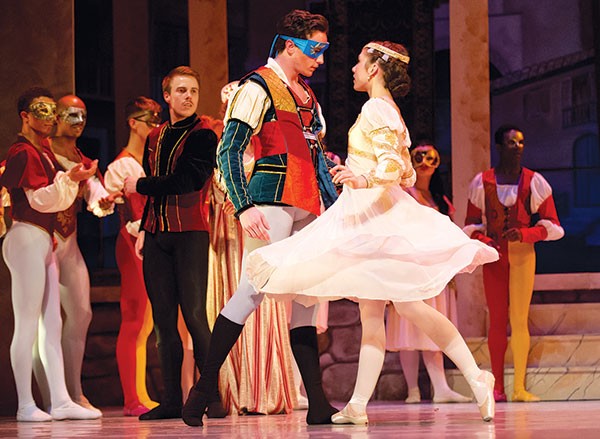 The ballet's storyline plays out as most do, with the first act setting up the bitter rivalry between the Capulets and Montagues. A fiercely angry Nick Fearon, as Tybalt, led the charge, with former PBT dancer Ernest Tolentino as the Duke, demanding calm between the rival camps.

The large cast of knights, lords, ladies and citizens appeared at times a bit sandwiched on the smallish Rockwell Theatre stage, which might have hampered some of the group dancing but did little to stall the sprightly performance of Sean Daly as Romeo's sidekick Mercutio. Daly's portrayal was more mischievous Puck than the usual charismatic rogue, but it lent spark to the production. Also of note was the powerfully serious and emotive performance of dancer Rachel Shirley, looking like a dead ringer for Bette Davis.

While much of the cast did their best navigating Petrov's challenging choreography and emphasis on acting skills, dancer Cassidy Burk as young Juliet shone on both counts. The bright-eyed and endearing dancer had all eyes riveted on her from the moment she stepped onstage. Her brilliant performance alone was worth the price of admission.

Burk and partner Hunter Mikles, as Romeo, provided much of the ballet's meaty dancing. From their initial meeting at the Capulet ball, through emotional pas de deuxs during the balcony and bedroom scenes and suicidal deaths, the pair — though they could have danced with a bit more passion and abandon — were thoroughly engaging.