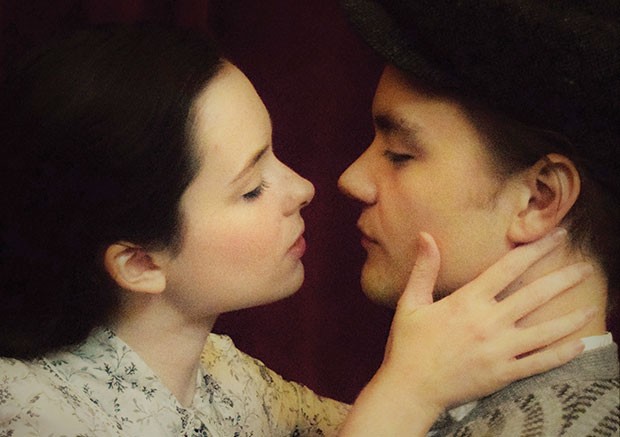 Imagine Shakespeare’s Mercutio meeting Mr. Rogers. It could have been a Saturday Night Live skit back in the daring Eddie Murphy days. But PICT Classic Theatre has afforded us this delicious opportunity by setting its production of Romeo and Juliet in WQED’s Fred Rogers Studio. Yes, in the same space where Mr. Rogers asked to be our neighbor, we can see the Capulets and Montagues slicing each other up in their neighborhood.

This may be, as director Alan Stanford declares in his opening remarks, “The best black-box theater in Pittsburgh.” However, it offers definite tradeoffs: It’s certainly more intimate than most other stage configurations, but words (especially Shakespeare’s) don’t sing like they do in a more sonorous, proscenium space.

This is not a problem for Alec Silberblatt, brilliantly cast against type as the bawdy Mercutio, who circles the square corners of the set as if vivified by the challenge. His delivery of the Queen Mab speech is a highlight of the show, and his rich performance will elicit remorse that Shakespeare chose to kill this character (at least until he resurrected him a few plays later, as Falstaff).

Adrianne Knapp, as Juliet, is cast according to type, but struggles with her delivery.  There is a plaintive sameness to her modulation (especially the monochromatic sobbing), perhaps because she chooses to play the 13-year-old character as an ingénue, instead of the rapturous force that she is.

Working against everyone is the percussive wooden platform of Johnmichael Bohach’s set. Whenever the actors step, they step on lines — literally. It’s kind of like having a jazz drummer off his meds, doing fills, randomly.

But this is just an annoyance; there are many plusses. The always dynamic James FitzGerald, as Friar Laurence, and Karen Baum, as the Nurse, offer transcendent performances, elevating everyone around them. And the capable Dylan Marquis Meyers, as Romeo, has fortuitously avoided the tendentious “Romeo-ized” style of Hollywood. Also, special credit to sound designer Kris Buggy for the eerie reverb effects in the tomb scene.

Ultimately, it may not be a beautiful day in the neighborhood, but it certainly is an entertaining night at the theater.

In Orphans, a cutting-edge acting technique comes to life at one of the area’s newest theaters