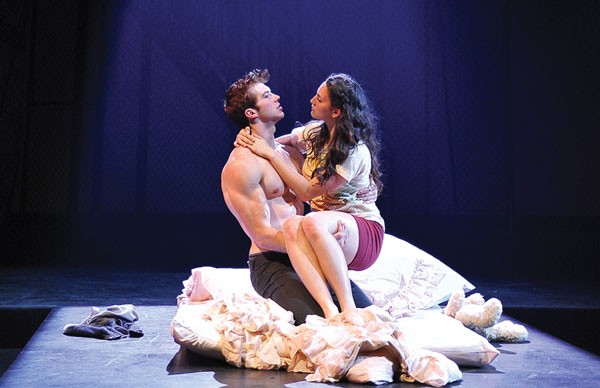 continues through Sat., May 4.

Killer abs, killer shoes — and of course all that killing in the plot — enliven Carnegie Mellon University School of Drama's production of Romeo & Juliet. Director Don Wadsworth goes "extreme" to yank Shakespeare's juvenile romance into the 21st century, whether the play can handle it or not.

Sure, the text is still 16th century, but now sometimes texted or rapped. The changing digitalized backdrops are glaringly hip. (Hiply glaring?) Romeo seems strangled in his headphone wires. And everybody's whipping out smartphones at the slightest photo op. Gee, you have to wonder why Friar Laurence sent important info by donkey-mail instead of Twitter.

Updating Billyboy is always a problem. The gadgets mainly add distractions and chuckles. OTOH, the production's assault on the senses does intensify the drama, and Wadsworth emphasizes the story's physicality to maximize the high energy of the characters. (Kudos also to fight director Randy Kovitz and choreographer Jesse Carrey-Beaver.) One thing is certain: The men of Verona are incredibly buff: more six-packs than Mellinger's.

There is much notable scenery-chewing. Brian Morabito dominates the first act: roaring, whispering and writhing to portray a super-charged and, if not sociopathic, at least obnoxious Mercutio. Adam Hagenbuch also dials it up for a capricious if charming Romeo. Amid the puddles of testosterone, Grace Rao creates an assertive and sweet Juliet. As her Mom, Ginna LeVine is a wonderful bitch and the only well-dressed one in the bunch.

Bright and bombastic, this R&J underlines just how hot-blooded, hot-headed (and just basically hot) hard-headed people get themselves into a lot of trouble. And sometimes the spectacle is a lot of fun. Does it add any great new insights into Romeo & Juliet? Is Romeo & Juliet even deep enough to offer new insights? Just enjoy the ride. And spare me the whining in the program notes that — surprise! — young people realize they live in a dangerous world, and that not even school is a safe haven. Gee. All I could think was May 4, 1970.