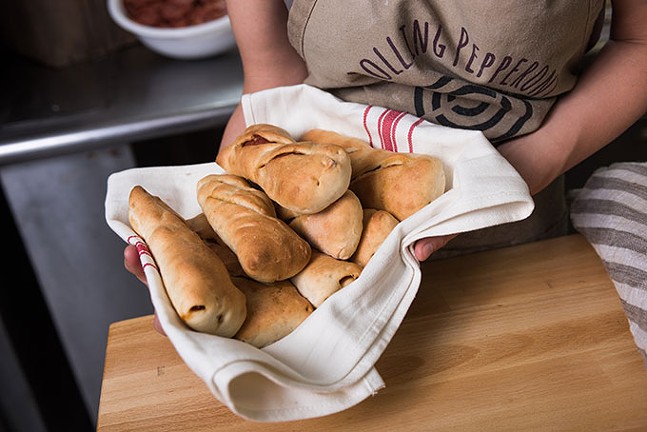 Pepperoni rolls have long been a staple of West Virginia culture and cuisine. They were allegedly invented there a century ago by an Italian baker named Giuseppe Argiro as a portable lunch for the local coal miners, and they remain a ubiquitous favorite throughout the state today. Though just an hour up the road and with plenty of mines of our own, Pittsburgh's pepperoni roll pedigree is less auspicious, but Rolling Pepperoni is hoping to change that.

The local wholesale bakery recently completed a successful crowdfunding campaign and is expanding to a storefront in Upper Lawrenceville near the 62nd Street Bridge. Owner Katt Schuler, a West Virginia native, says the new space will allow her to experiment more with ingredients in the rolls, including salami and different cheeses. She says the extra space will also boost the bakery’s efforts to collect local stories about Appalachia.

Together, she hopes it will mean more people learning about and enjoying the food and culture of West Virginia.

“It will be really nice to interact with customers more,” says Schuler. “I don’t really get to interact right now. And then we will have a safe space for West Virginians and the Appalachian culture and create space for makers.”

Schuler isn’t sure exactly when the storefront will open, but says hours will be initially focused on breakfast and lunch. Along with pepperoni rolls, the shop will serve coffee, sides, and soups.

The main component of the business will still be wholesale and distribution of the rolls, but Schuler says it will be “really nice to be able to provide hot rolls and snacks for people around there.”

On top of that, Schuler is excited to give her storytellers more attention. Rolling Pepperoni publishes stories and essays about Appalachian culture on its website, and Schuler says the investment in that side of the business has really paid off. She hopes to showcase more storytellers in the shop.

Schuler says future stories will include an interview with a scientist who researches pawpaws, a rare fruit that grows in Appalachia, and a woman who rode a bicycle to the top of the Appalachian Trail.

“The story series just wrapped the first year, and it has had a profound impact on us. It has been monumental,” says Schuler. “We will see where it goes for year two. We’ll have more space and more rolls. It’s going to be a positive experience.”