Rocky Bleier in The Play at Pittsburgh Public Theater 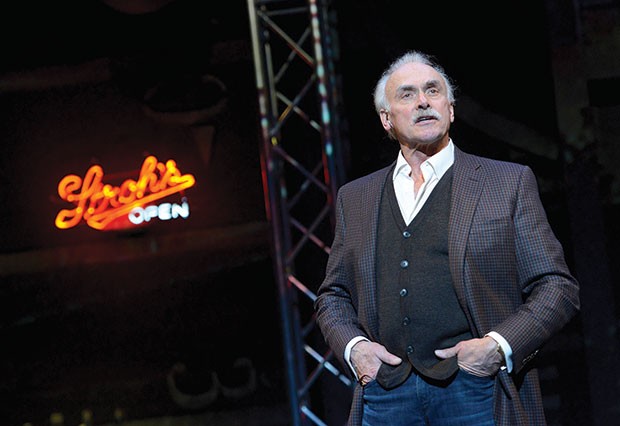 continues through Jan. 7. Pittsburgh Public Theater, 621 Penn Ave., Downtown. $15.75-75. 412-316-1600 or ppt.org
It was said that people voted for George W. Bush because he seemed like the kind of guy you could sit down and have a beer with. By that metric alone, Rocky Bleier should be voted Emperor of the Known Universe.

Bleier is currently on stage at the Pittsburgh Public Theater in a one-man show called The Play, and it’s difficult to imagine a more engaging, comfortable presence than Bleier’s. The evening is very much like hanging out at your favorite bar, while one of the locals spins out several entertaining yarns about his life.

Most Pittsburghers are probably well aware of the man’s highlights: Born and raised in Wisconsin, Bleier lived above the family bar and came to national attention as captain of Notre Dame’s football team. In 1968, Bleier got drafted twice: first as running back for the Pittsburgh Steelers and then into the U.S. Army during the Vietnam war. It was during that second conflict that Bleier was seriously wounded in a grenade attack, and his ability to walk, let alone play ball, was in grave doubt.

But through sheer grit and determination he fought back and became part of the championship 1970s Steelers team. Since his retirement, he’s focused on business and become an outspoken advocate for military personnel and veterans.

Gene Collier, writer of the Art Rooney bio-play The Chief and well-known Pittsburgh sports columnist, takes what could have been your standard “and then I did this, and then I did this” sort of play and has crafted a script informed with a refreshing intelligence, non-linear structure and welcomed restraint. It’s only toward the end that Collier (and Bleier) indulge in crowd-pleasing sentimentality — my least favorite part of the evening —but they’ve built up so much goodwill maybe they’re allowed to. And besides, the audience ate it up!

Bleier projects such an easy-going, thoroughly nice persona it’s hard not to be enchanted. (He’s like a less fanciful Garrison Keeler.) He’s cheerfully self-deprecating, gracious to a fault, and packing just enough Midwestern common sense to keep the evening from becoming either precious or ponderous.

Bleier’s a storyteller more than an actor, so a big hand goes to director Scott Wise for shaping this performance (and evening) without any needless flourish and helping Bleier put the most theatrically entertaining Bleier on stage.