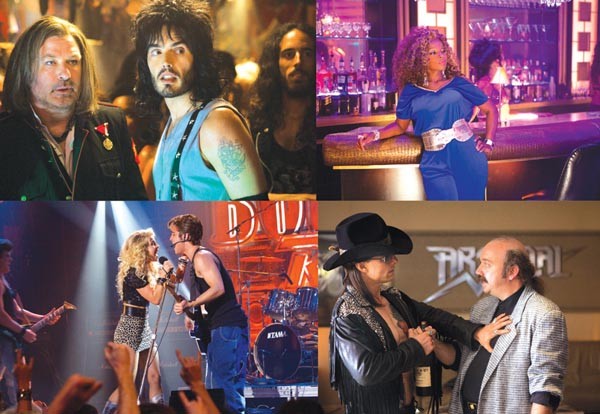 What can you really say about Rock of Ages, a musical rom-com that doesn't even take itself seriously? Adam Shankman's bloated but cheap-looking spectacle is adapted from the Broadway hit, and seems to demand little more from an audience than $10 and some ersatz nostalgia for the big-hair '80s.

When I wasn't re-hating on Pat Benatar songs, I gleaned these insights:

* Same old song and dance: Starry-eyed boy and girl in 1987 Los Angeles fall in love and dream of being famous while working in a rock club. He gets a gig, they break up, and she makes giant sad faces after turning to pole-dancing. (The entire women's wardrobe for this film could have fit in a guitar case.)

* The road to success is paved with power ballads. Your appreciation for this film depends on how much you want to hear the cheesiest songs from Whitesnake, Foreigner, Extreme, Night Ranger and their ilk, sung by actors. (You know who can't sing? Alec Baldwin.) Rock of Ages is basically an overlong Saturday Night Live skit mashed-up with a 1985 music video, plus strippers. Big musical numbers — "We're Not Gonna Take It" vs. "We Built This City" — may have worked on stage, but on screen, such scenes look like the medley numbers from '80s night on American Idol.

* Tom Cruise has fun as the out-of-control rock star Stacee Jaxx, but his off-brand comic megalomaniac shtick was fresher when we first saw it in Tropic Thunder. And speaking of stale: "Crazy rocker" moves now are more rigid than gymnastic compulsories. Cue the hair-whipping, back-arching, microphone-stand-fu and Jack-guzzling.

* Paul Giamatti, I forgive you. The big-name stars — Cruise, Baldwin, Russell Brand — are obviously getting their goof on, and it's impossible not to see them as their self-mocking celebrity selves. But Giamatti, a fine comic actor, got the wrong memo, and delivers an enjoyably wry performance as a sleazy manager. He even transcends his terrible hairdo, which cannot be said for Baldwin and Brand, whose wigs are wearing them.

* Dickie Goodman lives. Remember those old comedy records where the deejay would ask a question, and the answer would be a song snippet? Rock of Ages embraces a similar literalism of lyrics, but with less wit. When a journalist asks the besieged-by-fame rocker, "How does it feel to be the real Staycee Jaxx?" the answer is: I'm wanted / dead or alive. The whole film just goes on like this.

Or as Journey reminds us: It goes on and on and on ...