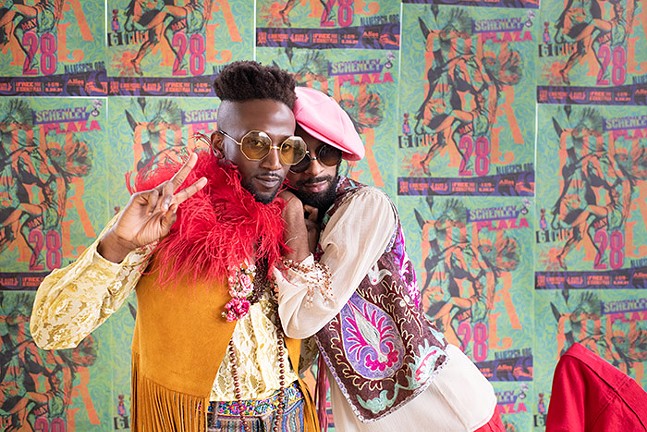 Photo: Courtesy of Allies for Health and Wellbeing
2019 Allies Ball
The annual Allies Ball celebrates and supports the decades of work to fight against HIV/AIDS, and it also serves to highlight how, even with life-saving medical advances and less panic about the virus, HIV/AIDS continues to be a major public health concern in Pittsburgh and throughout the world.

This has been the ongoing battle for Allies for Health and Wellbeing, formerly Pittsburgh AIDS Task Force. On Fri., May 28, Allies Ball will present the Free For All, a hybrid event that includes an online show and a livestream of the gala on a jumbo screen in Schenley Plaza, where members of the public are being invited to gather for a dance party and other festivities. This year builds on the virtual ball that took place last September, after the pandemic canceled the usual in-person event.

"Last year, I mean, literally a week before the in-person ball was supposed to happen, we shut it down," says Sean DeYoung, chief executive officer of Allies for Health and Wellbeing.

But as he and Allies event planner Thommy Conroy of 4121 Main point out, the move to online turned out to be a boon for the organization, causing them to reach many unexpected people.

As a result, Free For All was planned with accessibility and inclusivity in mind. Partiers have the option of coming to Schenley Plaza or watching from home, where they can also enjoy kits catered by a local restaurant and bar.

The inclusivity also extends to a Venmo campaign, the profits of which will be split evenly between Allies and True T PGH, a local creative platform that elevates queer people of color. There will also be a resource tent at Schenley Plaza with Allies partners, including Foundation of HOPE, Pittsburgh Action Against Rape, Sojourner House, and Women’s Center and Shelter.

DeYoung believes the change in format will help educate a wider audience on the importance of HIV/AIDS prevention and treatment, and why funding organizations like Allies are key to that mission. He sees this as crucial in a time when young people, particularly those born after the American AIDS crisis, have become less concerned about the potentially deadly virus.

"There's a lot of apathy with our younger generation. They're saying, 'Well, you know, if I get it, I can take one pill a day. ... I can live with it and be OK if I get to an undetectable viral load,'" says DeYoung, referring to groundbreaking pre-exposure prophylaxis, or PrEP medications that, if taken daily, can help "block the transmission of HIV."

Much of the reason HIV/AIDS was able to spread so quickly was because of stigma and ignorance DeYoung says still persists to this day. As a result, Allies works to create what DeYoung calls a "stigma-free place where people can come and get health care." In addition to its testing and prevention program, the organization, which serves an 11-county region, provides medical, dental, and behavioral health services, housing, financial, and pro bono legal assistance, and more.

Beyond HIV/AIDS care, DeYoung points out that they also treat infectious diseases like Hepatitis C, provide basic gynecological care, and do "gender-affirming care for folks that are transgender."

DeYoung says that, with the pandemic, funds are needed more than ever. Recently, he says Allies was able to purchase a van that enables them to take their services out into the community. He also stresses that they are looking at ways to better serve older patients living with HIV/AIDS.

"We found a way to keep people alive, and we have an aging population with HIV that are going to have health concerns," says DeYoung. "There's gonna be issues with housing and nursing home care and whatnot in the future for folks because there's a big population of people that are living with HIV that are now becoming elderly."

While the ball will raise critical funding for these issues, it will also be a time for celebration and recognition. Conroy says the Free For All theme takes inspiration from Chinese-American fashion designer Anna Sui, whose body of work was influenced by the "golden age of rock and roll,” particularly the famed 1969 music festival Woodstock.

The event will also honor advocacy work with an annual award named after the late Kerry Stoner, who helped found the original AIDS Task Force in 1985. This year, the award will be given to Clarisse Jordan, who DeYoung says has given much of her time to serving people living with HIV.

As the Free For All promises to be a fun, affirming celebration, DeYoung also wants it to be informative.

"HIV/AIDS is still a real thing," he says. "It's not out front in the news, but it's still something that is affecting our nation and people here locally, and we need to continue to fight it and be aware of it. And we have a lot of tools to fight it."
Allies Ball Free For All. 6 p.m. Fri., May 28. Schenley Plaza. 4100 Forbes Ave., Oakland. Free. Feed Your Head online event at 8 p.m. alliespgh.org/allies-ball-2021

A Conversation with the “Last Top in Pittsburgh”