Rock All Night brings Lawrenceville free music — all day, and into the night

"Lawrenceville United said, 'Well, why don't you try the cemetery?' And I thought, 'Oh, what band does not want to play in the cemetery?'" 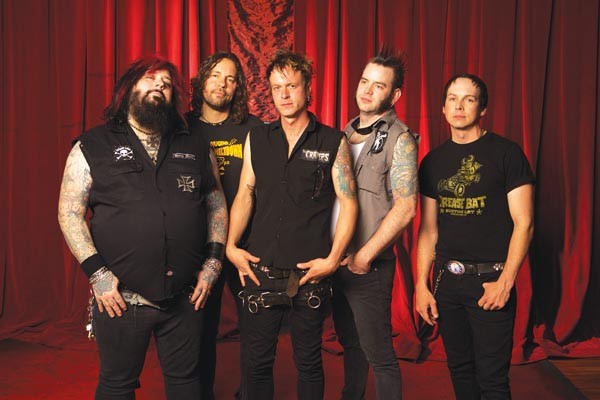 The Cheats, headlining at Thunderbird Cafe

Michael Devine — best known by his DJ name, Zombo — has a thing for Lawrenceville. In fact, he's lived there a few times.

The couple moved back in 2006 and bought a building where they live and where, for four years, they ran Zombo Gallery.

So it follows that he thinks that Lawrenceville, the face of hip Pittsburgh and maybe the site of the most eclectic night life in town, is the perfect place for his new baby, the Rock All Night Tour — or R.A.N.T. 2012. A takeoff on Lawrenceville's annual Art All Night event, it's sort of a combination music festival and walking tour: Bands of many genres play different venues up and down (and occasionally off) Butler Street, all of the shows are free, and patrons can stroll in and out at their leisure.

Originally, Devine wanted to host the event at the Leslie Pool, the closed pool that's hosted other events in recent years, but noise and liability issues meant that wasn't an option. Then he came upon another good anchor location.

"[Community group] Lawrenceville United said, ‘Well, why don't you try the cemetery?' And I thought, ‘Oh, what band does not want to play in the cemetery?' And to my surprise, the people from Allegheny Cemetery said, ‘Oh, that's a great idea!'"

That's where the bulk of the late-afternoon and early-evening activity will go down. (Despite its name, Rock All Night starts at noon, and only goes until 2 a.m.) Early on, you can catch acoustic acts Zack Schmidt and Broken Fences at Perk Me Up, the coffeeshop at 4407 Butler St. After an afternoon specialty-car show and rockabilly showcase near Stinky's Bar and Grill, at 49th and Hatfield, the action moves to the cemetery. There, roots-rock and old-time acts like Molly Alphabet, The Armadillos, The Allegheny Rhythm Rangers and the twin kings of Lawrenceville, Elliott Sussman and Slim Forsythe, entertain until 9 p.m.

From there, you're on your own: Seven other venues, ranging from hole-in-the-wall to venerable music venue, host bands of various genres.

Bluegrass rules at Eclipse Lounge (3705 Butler St.). Punk takes over the Thunderbird Cafe (4033 Butler St.), perhaps the best-known venue in the Butler Street corridor. The Cheats, fresh off their new release Pussyfootin', headline the show there, with support from Del Rios, pirate-punks The Bloody Seamen, and The Dirty Charms.

Electronic music fills the small room at Hambone's, just up the street at 4207 Butler; Una de Luna headlines, with Shutterdown and Robot Cowboy opening. Robot Cowboy — a.k.a. Dan Wilcox — is as much technologist and performance artist as he is musician.

"This guy's at CMU, and he does robots and music," explains Devine. "He's like a one-man-band Man or Astroman? ... It's crazy. The time I saw him, he got an old iMac, hollowed it out, put an LED screen on the front and wore it like a hat."

Booking and logistics for this, the first iteration of what he hopes will be an annual event, was a bit much for even a phenom like Devine. On board helping to organize and find bands were Mary Jo Coll, who books at Hambone's, and Casey Hallas, a musician who runs Rocking Horse Artspace, at 179 43rd St. (which will feature The Legendary Androids as part of the festival). "Between us, we know everyone," Devine says with a laugh — and it's not bragging if it's true, right?

In a way, Devine is lucky that folks have stepped up to help: While R.A.N.T. is his baby, and he didn't mind sinking some cash into it to make it happen, he admits that it got to be more work than he'd anticipated. But that kind of help and enthusiasm is part of what convinced him he could pull it off in the first place.

"In Pittsburgh, you can do pretty much anything you want," says Devine. "If you have an idea for a ridiculous event, there's a hundred people going, ‘Hey, need help with that?'"