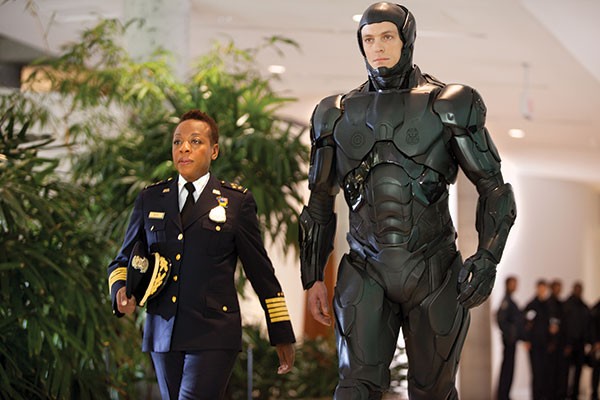 Paul Verhoeven's 1987 Robocop was a pulpy mix of satire, commentary and ultra-violence in a morally ambiguous storyline that made perfect sense for the darker side of the Reagan era. Didn't need a remake.

But I had some hopes for a re-built Robocop, directed by José Padilha, since 27 years later, we are more invested in privatizing policing and relying on robots and man-robot combos. And in the name of "security," we seem happy to accept huge shifts in civil and judicial proceedings, without thinking hard about the long-term consequences. While Robocop v. 1.0 had dystopic leanings — things aren't like this yet — v. 2.0 would have plenty of actual on-the-ground issues to explore.

Murphy is gravely injured (reduced to head, lungs and one hand), and OmniCorp sees the opportunity to debut a more acceptable robot cop, one "that knows what it feels like to be human." "We gonna put a man inside the machine," explains its CEO. (In real life, we're already employing a rudimentary version of this, as military personnel in the U.S. control drones operating on the other side of the globe: The drone sees, the man thinks, the drone acts.) But the robocop is an awkward mix: Too much human, and the robot cop's response time is slowed by emotions; too much machine, and well, the thing is dreadful at press conferences.

Despite Americans being "robophobic," the broader Murphy-robot ethical issues are barely depicted. The robocop is accepted without question at the police station (no cop-union freak-out?), and the public cheers when it busts a child molester.

Murphy's biggest struggles are personal, as he adapts to being something other than strictly human. If the generic action sequences were cut out, this might have been a small-scale sci-fi-ish tale about the personal costs and larger moralities of combining humans with high-tech machine parts. In the end, this film raises a few provocative questions about private policing, robots acting as humans and what aspects of humanity can be sacrificed for the public "security" (and corporate profits). But it just drops the ball on exploring them. Still a lot of work to be done on man-robots — and Robocop.