Roads of Arabia offers a regional history that might surprise you 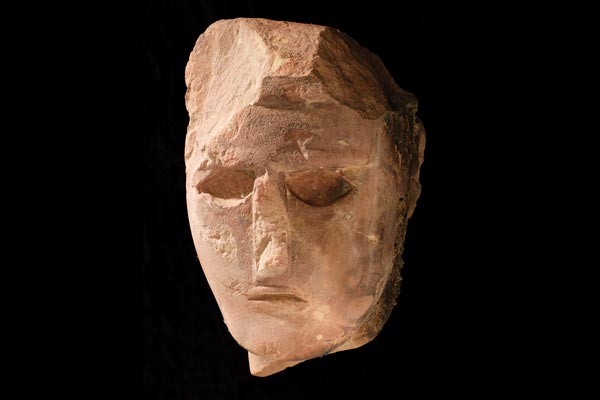 photo courtesy of Department of Archaeology Museum, King Saud University, Riyadh
Facing the past: Head of a statue, a sandstone sculpture from Al-Ula, 4th-3rd century BCE

ROADS OF ARABIA: ARCHAEOLOGY AND HISTORY OF THE KINGDOM OF SAUDI ARABIA

Many items displayed offer a remarkable first look into the recently discovered ancient cultural history of the Arabian Peninsula. Although railroad workers discovered large statues as early as 1909, it wasn't until the 1960s that the Kingdom initiated an extensive archeological program to uncover Arabia's rich and diverse cultural history. Many of the objects on display were found only within the past decade — and the material demolishes any long-held sense of Arabia as simply the domain of camels, nomads and barren desert. While the exhibition feels somewhat constrained, as if the Kingdom were not yet entirely comfortable with this new historical narrative tracing a rather cosmopolitan history, many of the artifacts are traveling outside of Saudi Arabia for the first time.

The exhibition is organized by the Arthur M. Sackler Gallery of the Smithsonian, in association with the Saudi Commission for Tourism and Antiquities. The Carnegie Museum of Natural History is one of only five North American venues. The exhibition uses the idea of roads — or, more precisely, trade and pilgrimage routes — to explore a cultural history of the region, with archeological finds dating to the Paleolithic Era.

Compiled mostly from the collections of the National Museum in Riyadh, as well as the Kingdom's regional and university museums, libraries and foundations, Roads of Arabia begins with three carved stone stelae found near Ha'il, in northwestern Saudi Arabia. Depicting figures that appear more modernist than ancient, each stele has a distinctive style. One dates back 6,000 years and wears a belted robe with sword; another, dating to the 4th millennium BCE, depicts a head and torso with mournful expression. These ancient artifacts clearly, if surprisingly, demonstrate that figuration was common in pre-Islamic Arabia.

More than anything else, the exhibition shows the unexpected diversity of civilizations that inhabited the Peninsula and the cities and oases that served as a crossroads between East and West. An introductory film explains that caravan routes grew because of a robust trade in incense — a hot commodity in the 6th century BCE. The region became a crucial link in a far-reaching network that supplied incense to Egypt, North Africa and Mesopotamia, as well as to the Greco-Roman world, India, and China.

The exhibition includes tools from the Paleolithic and Neolithic periods. These share space with carved stone animals found at Al-Magar. One, a figure of a horse, dates to approximately 7,000 BCE and offers clues to the domestication of horses at a moment in history far earlier than had been previously proposed.

Other sections contain objects that indicate cities and oases of great wealth. Tayma, in the northwest, was so prosperous that the Babylonian King Nabonidus occupied it.Because it was a crossroads, Tayma's artifacts, such as the carved sandstone "al-Hamra cube," exhibit influences from Babylonia, Egypt and Mesopotamia. Southwest of Tayma, the oasis at Dedan became the capital of the Lihyanites. Colossal statues depicting kings were discovered there. Several are on display and show a fusion of Egyptian and Greek styles. Nearby are large-format photographs of elaborate rock-cut tombs built by the later Nabataean Kingdom.

One of the most prosperous cities that grew along the trade routes was Qaryat al-Faw, in southern Arabia. As a commercial hub, it was a very cosmopolitan place, with a diverse population. The city contained luxurious multi-story houses, palaces, temples, markets and an advanced water-supply system. Many of the city's artifacts and luxury goods, while locally produced, show the distinct influence of Hellenism and a blending of local and foreign aspects. Included in discoveries there are fragments of frescos, bronze gods and goddesses, and carved alabaster figures.

The rest of the exhibition is devoted to the Islamic period, when incense routes became pilgrimage roads. Here the most striking items are the tombstones with elaborate scripts attesting to the diversity of Muslims who lived in Mecca, or traveled there from afar. Also of note is the massive 17th-century "Door of the Ka'ba," donated to Mecca by the Ottoman sultan Murad IV and used until 1947.

Of particular interest locally are large-format photographs throughout the exhibition depicting prehistoric rock art. These images come from fieldwork conducted by Sandra Olsen, zooarchaeologist and director of Carnegie Museum of Natural History's Center for World Cultures.

Despite this exhibition's 600-page catalogue, it feels as though there is much yet to uncover about the region's complexity, and as though many more discoveries must still lie beneath the centuries of desert sand.