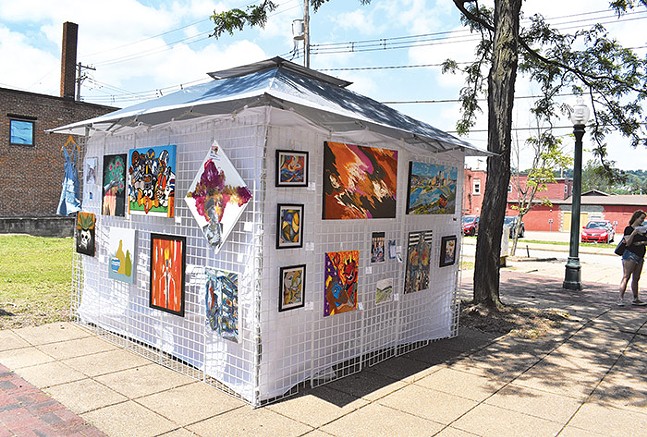 Photo: Courtesy of Roadkill Gallery
Art displayed in Roadkill Gallery’s cube-like structure
Pittsburgh artist and curator Chelsea Schilling has a passion for the strange. It comes across in her mobile gallery — Roadkill. It evokes a certain, almost abrasive image, one that is also very commonplace if you drive anywhere.

“I wanted something a little weird and funky, something that would capture attention but also kind of pull towards the idea that it is a mobile gallery,” says Schilling, who owns and directs Roadkill Gallery in partnership with multidisciplinary and installation artist Ally Wolf. “I didn't want it to be very stale and stagnant either. It's a strange concept. It's weird. And I'm a ’90s grunge baby. So Roadkill all the way.”

As a mobile art gallery, being accessible is an important tenet of Roadkill Gallery’s stated mission of providing "local artists the opportunity to reach new audiences in a unique platform for exhibition, collaboration, and performance” as well as “engage nearby communities in cultural enrichment through art education, events, and exhibitions.” The concept started out in the back of a rented U-Haul truck, but has since adopted a cube-like structure as a way to be more “COVID cautious,” according to its website.

Beyond that, the gallery also seeks to give a voice to artists who may not have had the traditional route to art-making.

“My main goal for Roadkill Gallery was to be able to represent underrepresented artists who didn't really have either an exhibition before, or who just haven't had much traction on their social media, or if they didn't really have much of a following,” says Schilling.

Roadkill accepts submissions and welcomes all styles, so artists don’t have to adhere to any particular practice. They display art in a salon style, instead of a more curated style, because of the space they inhabit.

The concept celebrated its grand opening in July 2019, and has since traveled to many different areas throughout the region. In 2021 alone, Roadkill Gallery has shown at Contemporary Craft in Lawrenceville, Kingfly Spirits in the Strip District, and at a Doors Open event in Homestead. Past stops include the Dancing Gnome Brewery in Sharpsburg, and spots in Braddock and Allentown.

The next destination for Roadkill Gallery is at the Millvale Music Festival on Sat., Aug. 7, where they plan to display works by 15 artists. They are also currently accepting submissions for another pop-up at Kingfly Spirits taking place Aug. 28. Submissions are due by Aug. 15 and the fee to enter is $10.

Schilling grew up in Pittsburgh, but moved away to attend art school at Temple University in Philadelphia. She says after seeing the Carnegie International at the Carnegie Museum of Art in 2008, she fell in love with art and decided to go to art school the following year. After Philadelphia, she traveled abroad for a number of years, but returned to Pittsburgh in 2016. 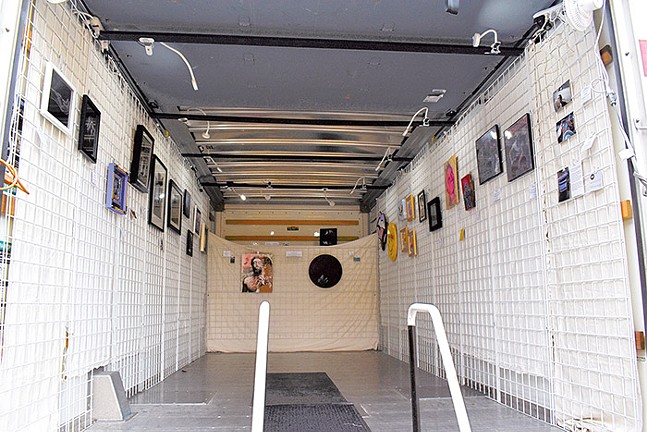 Photo: Courtesy of Roadkill Gallery
Art displayed inside Roadkill Gallery’s mobile gallery
After moving back to Pittsburgh, she started .5 Gallery in Etna with James Olson.

“We were trying to figure out a way to try to pull more people to our gallery and just to cross a bridge and come to that. I had this idea of looking at a mobile space and trying to figure out what the best sort of platform would be,” she says. “So we thought about shipping containers, even just having a little buggie that I can pull with my truck or whatever. Then, I just thought about renting U-Hauls out. And I really loved the idea of being able to create a space that can move around to different neighborhoods.”

After leaving .5 Gallery in December 2018, Schilling started building Roadkill Gallery. She received a grant from Awesome Pittsburgh for $1,000 that covered her start-up costs, and by summer 2019, Roadkill was up and running.

Roadkill’s first event was a success, and Schilling says it spurred her to want to continue with this unique and unconventional mode of accessing art.

Schilling herself is an artist who works primarily in sculpture. She currently does lifecasting, a practice that involves making three-dimensional copies of living human bodies.

She got the idea of adding scents to her sculptures in art school after being introduced to the art of American sculptor Robert Gober, who also works in lifecasting. Schilling wanted to do something a little weird that would go beyond just looking at something odd, so she sculpted armpits, sewed hair into them, and added pleasant scents to each sculpture.

“I am currently making pieces that are scented and pulling that in with my sculptural material,” she says. “So it can be a little bit more personal, I'm trying to touch base on what a specific scent reminds you of.”

Schilling is in the process of purchasing a Winnebago, so that Roadkill Gallery can inhabit an even more stable space in the Pittsburgh art scene. It will also have a lift gate, so that the art showcased can be accessible to disabled people and those in wheelchairs.
Roadkill Gallery at Millvale Music Festival. 12 p.m. Sat., Aug. 7. Sedgwick St., Millvale. Free. roadkillgallery.org