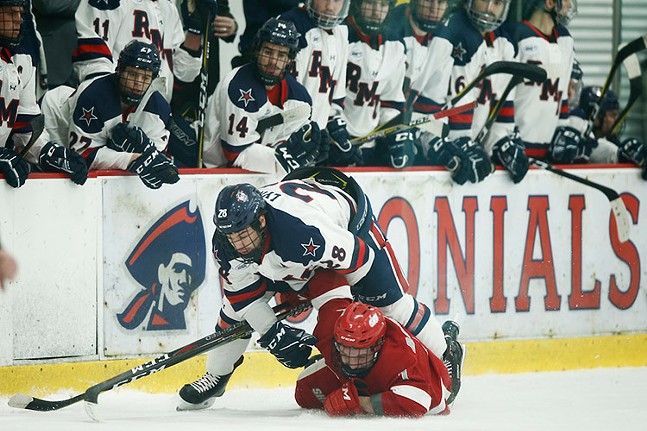 “I came in day one with a telephone and a desk and they said ‘Go start a program,’” says Schooley.

In the 17 years since, both the men’s and women’s programs at Robert Morris University have become a staple in the Pittsburgh hockey community. Not just for their success on the ice — both the men’s and women's programs boast Conference Championships in their history, with the women winning this season — but for the impact the programs and their top-notch facilities made on the hockey scene locally.

But on Wed., May 26, that all came to an end. In a press release, RMU announced it was ending the men’s and women’s hockey programs at the school, effective immediately.

The move came as a complete shock to the Pittsburgh hockey scene, and, more importantly, to the players and staff of the respective programs. When asked how they found out about the dissolution of their program, Schooley says, “I found out a little after noon on Wednesday. We were rushed into a meeting with Human Resources after that. Coach Colontino from the Women’s program went after me, and then we had a meeting with our staffs together at 1:30.”

As for the players, they found out about it basically right along with the rest of the community. “I was out-and-about running errands, and I got an email about an ‘important student-athlete meeting,’” says graduating Senior Forward Anjelica Diffendal. “The email was sent out at 12:45 and the meeting was at 1:45. … Roughly 2 o'clock, my phone started vibrating and ringing that both the women’s and men’s hockey teams were getting cut. I was in shock, my mouth dropped.”

The backlash has been swift. “The way the university has shown it clearly does not care about the current student athletes … is disgusting,” says Terry Shafer, a Goalie for Robert Morris from 2012-2016. “I would also like to know how the goals of this program have not been met or exceeded when the program was created less than 20 years ago,” says Diffendal. “I think everyone is completely shocked, devastated, and simply confused. To not give the 55 athletes and seven staff members a heads up in advance? It just isn’t right.”

This confusion partially stems from the way the announcement was made. Not given a separate release, the statement was titled “RMU Charts Strategic Course Headed Into Centennial Year,” with a subhead, “The Beyond 100 plan includes a focus on diversity and inclusion, more campus events, and a reorganization of its athletics programs.” The first line of the statement then reads, “Robert Morris University announced today it will no longer field NCAA Division I men's and women's ice hockey teams as part of a series of strategic initiatives intended to position the university to be amongst the most agile and professionally focused schools in the nation as it prepares for its upcoming 100th anniversary.”

This left many with a sour taste, including media scholar Letrell Crittenden who tweeted, "Just a thought, but lumping your efforts at improving Diversity and Inclusion to an announcement to kill a popular sports program isn't exactly the best way to endear people to diversity and inclusion efforts. In fact, it's counterproductive."

People involved with the program expressed frustration there was no specific reason given as to why two of their most popular sports programs were being cut, other than as part of a larger realignment of priorities. On Twitter, former Robert Morris Women’s Goaltender and two-time Olympic Silver medalist Brianne McLaughlin wrote, “The more I hear and read I feel like there isn’t a reason? Moments later something is released about how much money the school has for other things. When there is a will, there is a way, and it seems like the will to make this work was non-existent.”

That “moments later” McLaughlin is referring to is in the same press release. When discussing the other recent updates for the school, the statement reads, “Among the university's other recent milestones was surpassing its goal in its record-setting $100 million fundraising campaign, nearly a year ahead of schedule.” The school’s overall endowment in 2020 was an additional $38 million.

When asked by Pittsburgh City Paper if the strategic initiatives RMU mentioned simply meant a cost-based move to reallocate funds to other parts of the school, and if any sort of alumni fundraising initiative could’ve changed the outcome, Potts responded with the following:

“Certainly cost was a consideration in our decision to discontinue our NCAA Division I ice hockey programs. We have a larger NCAA Division I athletics program than many institutions of our size; in fact, we still field 15 D1 sports, even after our decision to discontinue D1 ice hockey. We took into account scholarships and operating costs, and the necessary improvements to keep our facility competitive at the Division I level. We would not have moved forward with this decision had we not first considered whether we could raise sufficient external funds to sustain the program in the long run. Our overriding priority as a university is to provide an education that is affordable and accessible for as many students as possible.”

Shafer disagrees with the assessment that they couldn’t have found the funds elsewhere. “I know both myself and my parents would be willing to donate, as well as my classmates and their families as well,” he says. “Not getting a chance is a real punch in the gut and makes people feel unappreciated.” Schooley also feels as though there are stones left unturned. “We’re working … to see if there is an amount of money that can we raise to save these hockey teams because we owe it to the alumni, we owe it to the current players, we owe it to the former staff member, we owe it to the community to try and keep this program alive.”

A "Save RMU Hockey" GoFundMe has been created to raise money to bring back the teams. In the first day since its launch, just under $13,000 has been donated of its $2 million goal. The fundraiser page says they "currently have pledges totaling $225,000 from private donations," and promises all donations will be returned if they don't reach their goal.

Situations like this are not without precedent. Last year, the University of Alabama-Huntsville discontinued their hockey program due to COVID-19 budget constraints. After an outcry, the school said if it could raise $750,000 by the end of that week, the program would continue. With backing from the community, including Calgary Flames Goalie Cam Talbot, the program raised the money necessary and continued.

While a number like that may seem steep, the support from the community has been immense, with petitions and hashtags being distributed by people such as Miracle on Ice team Captain Mike Eruzione and Barstool Sports personality Dan Katz to his 1.2 Million Twitter followers.

The University of Alabama-Hunstville team went on to a 3-18-1 record last season, but just announced this month they were dropping their hockey program for the third time because they "failed to secure an affiliation with a conference," according to a statement on their website.

A big reason for outpouring for RMU's teams comes from not only the unceremonious end to the program, but from the important role the team and the culture had in the Pittsburgh hockey community. When the program started, they purchased the RMU Island Sports Center in Neville Island for $10 million. Since then, the facility has been equipped with multiple world-class rinks, a golf range, weight rooms, and more. As The Athletic writer Jesse Marshall tweeted, “The arrival of Robert Morris as a D1 program benefitted every single hockey player in the Pittsburgh area with a world class facility to play at. It forever changed the landscape of hockey in Pittsburgh. It's almost like life is pre/post-RMU in the city.”

The players and the staff say they felt this connection to the city during their time there. “The men’s program mentored and had The Artic Foxes Youth Hockey Association, the Women’s had a Big Sister program with Pens Elite,” Scholley says. “Both programs have outstanding young men and young women, and they’ve done an outstanding job on and off the ice.” Shafer says he thinks as fondly of his time in the community as on the ice. “It will be a huge blow. ... I made it and tried my best to do the same for the youth hockey players in Pittsburgh,” says Diffendal. “I hope young kids don’t stop pursuing the sport. It was a privilege to be role models for this community in Western Pennsylvania.”

The move will have an immediate impact on the current players as well. While the school’s statement says it “will honor all scholarships currently being received by the student-athletes whose sports are being discontinued and will assist those who wish to transfer,” the reality might not be so simple for some student athletes.

With the new academic year set to start in a couple of months, most programs have already set their rosters and scholarships for the upcoming season. And because of the pandemic shutting down the 2020 season, athletes are able to transfer this season without having to sit out a year like they normally would, creating the deepest transfer portal ever seen in the NCAA. “It’s not about scholarship money right now, it’s about locker spots,” said Schooley. “It’s a challenge for these guys. For the coaches, there’s no head coaching jobs open in women’s, there’s no head coaching jobs open in men’s. It’s a challenging time for everybody involved.”

Many alumni are still holding out hope that they can do something to turn it around, but it will be an uphill fight. “I would think there will be a group of us who may push to get a meeting with leadership after securing a letter with as many hockey alumni signatures as possible,” Shafer says. “I wouldn’t want to do anything out of turn but as an alumni of the university and program, we deserve answers and transparency.”

And as for the people left in this decision’s wake, reality still hasn’t quite sunk in yet. “It’s been sad, it’s been disappointing, it’s been shocking,” says Schooley. “We just want to keep playing. We feel like we’ve got two really good programs, and we just want to keep going. ... Thank you to the city of Pittsburgh, thank you to Moon Township, thank you to everyone that’s made us feel welcome for the last 17 years.”

“Growing up in the Pittsburgh area, I’ve watched RMU Hockey teams and have played at the RMU rink for the past 18 years,” says Diffendal. “When I would walk into the rink, I would see the student-athlete pictures on the wall, and I wanted to be just like them when I got older. For all the young girls and boys who looked up to the players on both teams, just as I did when I learned to play, I’m sorry it had to end this way.”