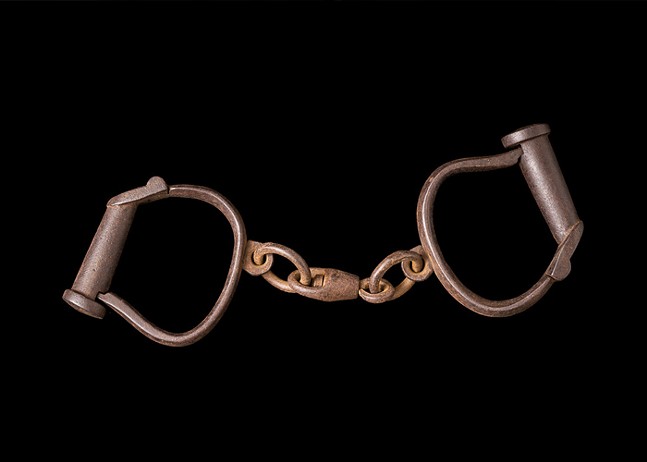 Photo: Stephen Chalmers
Photograph of the handcuffs used to arrest Scott Jackson for the murder of Pearl Bryan
True crime culture tends to dwell on the same cases, mostly based on their level of notoriety, or because of their more shocking or sensational elements. Pearl Bryan, a photography exhibition at Robert Morris University, will examine one tragic case that, perhaps due to its age, has rarely been covered.

Artist Stephen Chalmers uses the show — on view through Nov. 7 in RMU's Wheatley Center Media Arts Gallery — to examine the brutal death of Pearl Bryan, a pregnant woman in Kentucky who was killed and decapitated by her lover in 1896 with the assistance of his roommate. According to a release, the shocking murder was called “the crime of the century” at the time and “captured the imagination of the country — with daily coverage of the trial, including by the New York Times, and more than 25 popular folk songs.”

Chalmers visually tells Bryan’s story through 80 pieces, including photographs of original sites and artifacts related to the crime, which range from the innocuous to downright gruesome. Guests will see the handcuffs used in the arrest of her murderer, copies of Bryan's school photograph that were sold as souvenirs, and the bag in which her head was allegedly transported.

Chalmers, an established art photographer whose work appears in several collections, including at the Museum of Contemporary Photography, Light Work, Polaroid, and the Getty Research Institute, says he stumbled upon the case at the New York Public Library, where his wife, Dr. Ewelina Boczkowska, a musicologist, was researching a Polish émigré composer.

“While she worked on her research, I would explore the NYPL collection, and came across an anthology of murder ballads — a musical tradition of retelling the story of a violent event, often with moralizing undertones,” he recalls. He was struck by one ballad about Bryan, a "young woman from rural Indiana" who suffered the aforementioned grim fate after becoming pregnant and traveling to Cincinnati to be with the father of her unborn child.

Chalmers says the case resonated strongly with him as someone who grew up in Louisville, Ky., as well as traveled regularly to Cincinnati for two decades. "After looking more into the case, I was increasingly intrigued — there are multiple different versions of the ballad, the story was huge nationally, with books written about the crime and coverage in most media in many markets," he says, adding that The New York Times produced daily coverage of the trial.

Photo: Courtesy of Christine Holtz
Pearl Bryan at Robert Morris University
Chalmers says a dozen murder ballads written about Bryan, dating from the 1920s to the present, play in the background of the gallery space.

To do justice to Bryan's story, Chalmers says he read "thousands of pages of court transcripts, news accounts, and tabloid-style books from the era," and "visited numerous small historical societies to examine (and photograph or scan) their collections." He even hired a metal detectorist to recover material from the site where her home once stood, and purchased artifacts online.

While Bryan represents the most historic subject he has covered, Chalmers says the show still fits in with his previous art projects, which "have examined how memory, and especially traumatic memory, is inscribed on the landscape." He cites Unmarked, another true crime-related exhibition that showcased photographs Chalmers took of sites where the victims of serial murder were discovered in an attempt to "memorialize these individuals and to draw attention away from the perpetrators of these violent crimes." For Climbing the Ladder with Gabriel, he interviewed a woman in recovery from methamphetamine addiction and photographed locations that were "pivotal in her journey into addiction, where she hit bottom, and the locations important in her recovery."

He also photographed 1,300 locations of demolished vacant homes In Youngstown, Ohio, where he and his wife now live.

Chalmers identifies several reasons why he felt compelled to create what he calls a "social documentary photography project." He calls Bryan’s story "suddenly very timely," given the U.S. Supreme Court's recent decision to overturn Roe v. Wade, which made abortion "essentially illegal" in Ohio, in Bryan’s home state of Indiana, and in Kentucky, where Bryan was murdered.

"Since the Supreme Court decision this past June, many states have regressed to what was the norm in the 1890s, when Pearl Bryan struggled (and was murdered) as a result of her pregnancy," he says.

He expresses concern that abortion may become illegal in Pennsylvania as well if Sen. Doug Mastriano, the far-right Republican candidate currently running against Democrat Josh Shapiro in the state governor race, is elected this fall.

The comparison becomes especially shocking given how public fascination dehumanized Bryan, who was seven months pregnant at the time of her murder. Chalmers claims that Bryan's fetus, which was removed during her autopsy, was even put on display at a pharmacy, in a glass peppermint candy jar, as a way to "boost soda sales." (A photo of the pharmacy is also part of the exhibition.)

Despite its bleak subject matter, Chalmers hopes the show provides viewers with a "meditative experience" and that "they will consider how some of the locations are dramatically different than they were 120 years ago, whereas some are essentially how they must have looked at the time. That they will consider the existential struggle of Pearl Bryan, her horrific time in Cincinnati, and her eventual murder at the hands of her lover and father of her unborn child."Pearl Bryan. Continues through Nov. 7. Robert Morris University. 410 Pennsylvania Ave., Moon Township. Free. rmu.edu