Just up the Allegheny River from Pittsburgh are two riverfront communities whose old-fashioned, village-like atmosphere we enjoy: Oakmont and Verona. If Oakmont has by far the higher boutique-to-citizen ratio, down-to-earth Verona also has lots to recommend it, including a big bike shop, antique stores to browse, and the beer-swilling, pan-frying fish on the sign of Rivertowne Inn, which has greeted visitors along Allegheny River Boulevard for decades.

That's almost as long as we've been charmed by the sign and curious about the business it heralds. It's just that a certain native caution keeps us out of a lot of neighborhood bars: You never know when you'll be welcomed as family, or when you'll get the fisheye (no pun intended) for as long as it takes to drain your Iron.

But once Rivertowne made an appearance at a local beerfest, we figured it was reaching out beyond the regulars. A quick check online revealed two sister restaurants, in North Huntington and Monroeville (the latter a brewpub!), and a menu, shared by all three locations, which is far more expansive and interesting than that of your typical neighborhood bar.

Choosing authenticity over novelty, we visited the original location in Verona and discovered a warmly lit warren of cozy, tightly packed dining rooms buzzing with casual, convivial atmosphere. At one table, we saw a half-dozen tweens; a quick scan revealed parental types one table over, trying hard not to embarrass them. We liked the idea of a neighborhood bar where the kids are welcome: Our own preschooler received crayons and a "minnow menu" for coloring.

A long menu of sandwiches, burgers, pizza and more has its merits, but easy decision-making isn't one of them. Fortunately our friendly waiter was helpful with good advice, and steered us well. The first thing we ordered was Scotch eggs -- hardboiled eggs coated in sausage and fried to a fare-thee-well, a not-for-the-faint-of-heart appetizer that we definitely don't see at every local watering hole. Though Rivertowne's were flavorful, they lacked a crispness on the exterior which should be the hallmark of this unusual dish.

We were also eager to try deep-fried pretzels, an item new to us, especially the one stuffed with pepper-jack cheese. (The one served with chocolate sauce sounded delectable as well, but was perhaps best left to dessert.) Although undeniably greasy, the crust was crisp and crackly, with the cheese providing flavor and richness without overwhelming the sweet, bready dough. With a gooey, chewy, crispy texture triad, this dish is a classic in the making.

A half-bucket of King Crab legs was a holiday-season indulgence, but a disappointing one. The serving was generous for the price, and the cup of melted butter was genuine, but the crab seemed warmed-over and less than succulent.

Jason's steak and drunken mushrooms featured an unremarkable piece of beef -- center-cut sirloin -- grilled to perfection, tender and juicy, topped with thin slices of white mushrooms sautéed in butter and "ale sauce." The savory sauce was just enough to flavor the steak without drowning its beefiness. Unfortunately, the side of spicy grits, which had sounded so enticing, was thick, dry and much too salty.

Angelique was in the mood for a cheesesteak, and Rivertowne's hit the spot. It also filled her up: The small size was more than a meal's worth, with fillings spilling onto the plate. Aside from the eponymous steak (thin-sliced rib-eye, which was tender and tasty) and cheese (which could have been a little better integrated), there were sautéed onions and two kinds of peppers: sweet red bells and tangy yellow bananas. It was the latter, in Angelique's opinion, which made the sandwich, adding considerable zing to a tried-and-true combination.

While we both appreciated the variety and originality of Rivertowne's extensive menu, Jason was, in the end, underwhelmed by three of four dishes in front of him. Angelique, on the other hand, enjoyed her stuffed pretzel and cheesesteak so much, she's bringing us both back for more. We may yet become regulars at Verona's Rivertowne Inn. 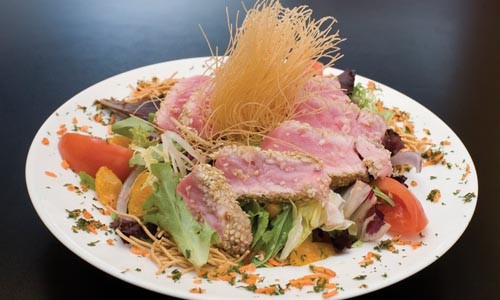