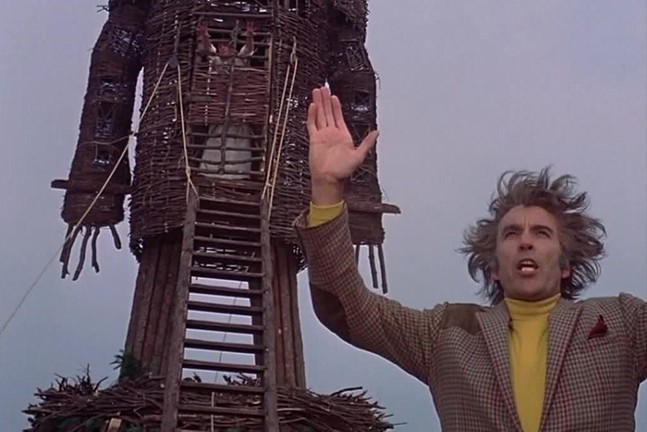 Photo: Courtesy of StudioCanal
Christopher Lee in The Wicker Man
Before he was Count Dooku or Saruman, the late Christopher Lee was the face of some of horror’s gnarliest and most devilish villains. The latest Drive-In Super Monster-Rama at the Riverside Drive In Theatre pays tribute to what would have been his 100th birthday with the Christopher Lee Centenary Celebration.

The Super Monster-Rama, taking place over two days on Fri., Sept. and Sat., Sept 24, will showcase eight of Lee’s spookiest movies. The lineup features films like The Curse of Frankenstein, the 1957 movie that put Lee on the map as a major horror actor, and the 1976 release To the Devil a Daughter, in which Lee plays an insidious excommunicated priest. As expected, the 1973 folk horror classic The Wicker Man, which stars Lee as a charismatic cult leader, will also screen.

Before it materialized into an event, Super Monster-Rama was a personal dream, Reis says. “I wanted to do something that I hadn’t experienced much,” Reis says. “It’s kind of like I’m going back in time and recreating these things that I missed because I didn’t get to see them on a big drive-in screen.”

Photo: Courtesy of Hammer Film Productions
Christopher Lee (right) in To the Devil a Daughter
Monster-Rama is no stranger to showing Lee’s work. Reis has screened most of the films Lee made with the British studio, Hammer Film Productions, and one of the movies on this year’s Saturday lineup, the 1972 flick Horror Express, was on the billing for the inaugural Monster-Rama.

Lee has come to be known for his big characters — he reprised his role as Dracula over 10 films — so giving the big-screen treatment to his lesser-seen films this year was important, Reis says.

“He has a massive filmography,” Reis says. “I was looking for what we haven’t shown and things that would appeal to this audience.”

Since cult horror rarely makes its way onto the big screen, Super Monster-Rama’s retro lineup is a goldmine for old-school horror fans looking to reexperience films from their childhood. But Reis says that, as the event has grown, so has the number of younger fans down for a good gory time.

“We’re getting younger and younger people,” Reis says. “And they were really too young to see a lot of these movies at a drive-in. So their experience is something they weren’t able to do before.”

In between movies, Reis screens period-accurate commercials and trailers previewing the new “nightmare of horror” to situate audiences in the era. Stay long enough and maybe you’ll wake up in Dracula’s mansion.

“It’s a total retro experience,” Reis says. “When you’re showing these from 30 years and back, you really feel like you’re back in time.”
Drive-In Super Monster-Rama. Fri., Sept. 23 and Sat., Sept 24. Riverside Drive In Theatre. 1114 Lees Lake Lane, Vandergrift. $10 per person each day, additional $10 per person for overnight camping. riversidedrivein.com/special-events