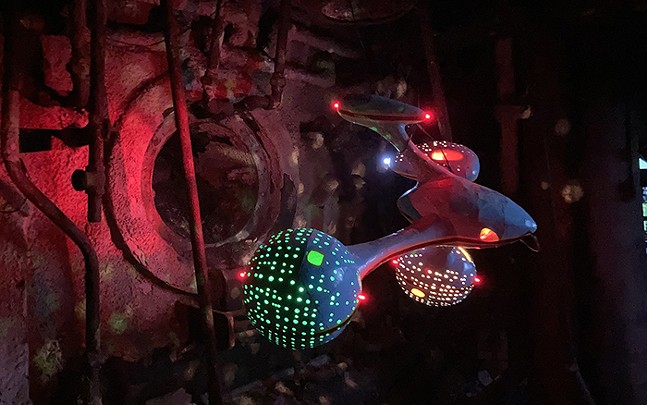 Photos: Rivers of Steel
Spaceships by Ryder Henry, installed in the Cast House of the Carrie Blast Furnaces
During the day, Rivers of Steel leads tours through the historic Carrie Blast Furnaces, using the former Homestead Steel Works site as a way to highlight the industrial past that, for decades, defined the city. Now, the organization offers a modern illuminating experience with LightPlay, an evening exhibition featuring works by several local artists.

Described as a “sensorial maze,” LightPlay — which opened on Sept. 10 and runs through Oct. 1 — leads crowds through over four acres of immersive light and sound installations, digital video artworks, and sculptures. However, Chris McGinnis, director and chief curator for Rivers of Steel Arts, says the term “maze” speaks to the way audiences feel more than the actual design of the exhibition. In other words, there's no labyrinth to navigate.

“The way you maneuver through the site has a very disorienting feeling,” says McGinnis, describing how visitors will walk through cavernous pathways, under the furnaces, and sometimes double-back, all while taking in a wide variety of experiences ranging from booming, in-your-face party vibes to rooms that are quieter and more contemplative. “A lot of that maze quality is not necessarily something we are creating, as much as something that we are responding to and maybe enhancing through the light.”

McGinnis says Rivers of Steel had been interested in doing more evening programming, but credits the spread of COVID-19 for the decision to ultimately pursue LightPlay. It also helps to make up for the loss of planned programming canceled by the pandemic. This includes the annual Rivers of Steel Festival of Combustion set for mid-September, which has previously attracted crowds of a few thousand, a number McGinnis says is “not possible right now.”

McGinnis recruited artists either he or the organization had worked with before. He also wanted a group that represented a diverse array of styles and backgrounds, as well as across race, ethnicity, and gender identity. As a result, the show includes contributions from Japanese-American artist Shohei Katayama, as well as Alisha B. Wormsley, best known for her impactful “There Are Black People in the Future” billboard and subsequent projects. 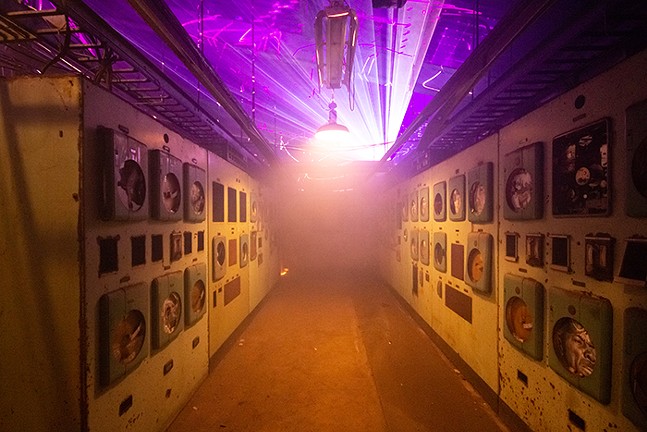 Artist Ian Brill says he became involved with LightPlay as a way to experiment with works that were scaled down from his usual light installations, which have taken residence in numerous locations, including the second floor of Spirit in Lawrenceville.

“During the pandemic, I became interested in creating works that achieved some of the goals of my larger, public works, but with a smaller footprint — one that could be installed quickly,” he says.

While his previous installations tended to be spectacular and disco-like, implementing kinetic displays of colors and patterns, he says his LightPlay work “became a recording of imagery that brought me a sense of calm,” adding, “I am especially fond of how the projected light casts moving shadows in the room in which it stands.”

He believes the approach is both “practical and appropriate” for this particular time.

“My intention is that this work should be seen more as a solitary work, to reflect the isolation we have all experienced these past few months,” says Brill. “It seemed irresponsible to get too carried away with a large, team-built endeavor. It was refreshing to let the content speak for itself.”

Those concerned about attending a non-museum exhibition at this time will find that Rivers of Steel has taken a number of precautions ensuring the safety and well-being of its guests, both in regards to COVID-19 and to being on a former industrial site at night.

“It's already safe to walk through based on standards up to this point,” says McGinnis, adding that staff will also be on hand to prevent guests from wandering into restricted areas.

Ambient and directional lights provide what he calls a “very clearly delineated path” through the site. Besides the obligatory mask and social distancing requirement, there will also be hand-washing and sanitizing stations throughout the site. Timed ticketing will be implemented, with groups of 30 people being let in every half hour.

Besides giving people something to enjoy when many arts and cultural institutions are closed, McGinnis sees LightPlay as a way for Rivers of Steel to continue exploring “imaginative ways to re-think the purpose of a site” and, hopefully, engage with new audiences.

“It operates at the level of supporting a creative reinterpretation of the site, but also supports us by bringing in a wider range of people who may not come to a historic tour,” says McGinnis, “but might come to this type of event and realize they can come back on a tour and learn about the region.”