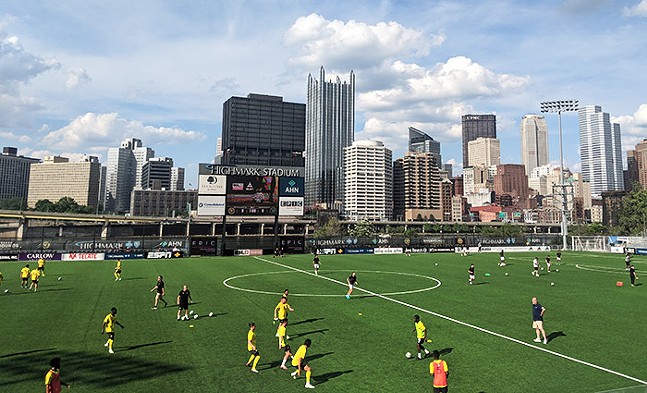 Steel Army, an independent support group of Riverhounds fans, tweeted a statement shortly before noon on July 16 opposing the Riverhounds’ partnership. About 11 hours later, the Riverhounds announced it would sell Chick-fil-A sandwiches for its July 17 game against Loudoun United FC to honor their initial agreement but that it would not continue the promotion beyond that match.

Steel Army was critical of the sponsorship because of Chick-fil-A's well-documented anti-LGBTQ actions and affiliations.

Steel Army has even based fundraising efforts for LGBTQ causes around Riverhounds games. This includes Prideraiser for the Persad Center, a community-based mental health and substance abuse outpatient counseling center that supports the LGBTQ+ community and those living with HIV/AIDS. During the fundraiser, which ended July 1, people pledged a total of $241.70 per goal that the Riverhounds scored, raising $2,417 for 10 goals.

“We, having spent the past month soliciting donations on behalf of a local LGBTQ+ organization, strongly oppose the Riverhounds entering into a partnership with a local franchisee of a fast food restaurant chain that has a well documented history of corporate donations to organizations that promote anti-LGBTQ+ ideology,” says the Steel Army statement, which received support from fans online. “We’ve made the thoughts of our membership clear to the front office and hope they reconsider this agreement as well as take more care in the future with selecting their corporate partners.”

The Riverhounds are not the first Pittsburgh athletic organization to receive criticism for partnering with Chick-fil-A. In 2018, the DICK’s Sporting Goods Pittsburgh Marathon received backlash for partnering with the McKnight Chick-Fil-A for a post-marathon celebratory kids’ event. P3R, which organizes the marathon, issued a statement at the time that it would continue its partnership.

While the Riverhounds thanked the independently-owned McKnight Chick-fil-A for their collaboration, their statement emphasizes that “The Hounds and Highmark Stadium strongly believe in making all of our fans feel welcome.”

Chick-fil-A has a history of donating to anti-LGBTQ+ organizations. In 2017, the popular fast-food company donated more than $1.8 million to the Fellowship of Christian Athletes, the Salvation Army, and the Paul Anderson Youth Home, three organizations with histories of anti-LGBTQ discrimination. Chick-fil-A CEO Dan Cathy has also come out against same-sex marriage rights.

While the Riverhounds did not specifically comment on any of Chick-fil-A’s actions, its statement says, “As an organization, we will continue to look for ways to partner with local and national brands to improve the game day experience for everyone.”