"The blazing clarity of dawn: light creeping from beyond muddy fields; a plane leaving a white scar across the sky; drunken soldiers howling songs of love and rape in the next compartment."

That's Aleksandar Hemon opening a new section in "Love and Obstacles," his short story about a Bosnian boy on a train trip to buy a freezer. It's the title work in his latest collection, published by Riverhead Books -- the follow-up to works including National Book Award finalist The Lazarus Project (Riverhead Books, 2008). You might also know Hemon's work from Esquire, The Paris Review and The New Yorker -- the latter where "Love and Obstacles" first appeared.

A visit from the acclaimed young writer, winner of a MacArthur Foundation "genius grant" and a Guggenheim fellowship, launches the Pittsburgh Contemporary Writers Series' new season.

Hemon is here to pick up Pitt's 2009 Fred R. Brown Literary Award, for fiction writers in early stages of their careers. But he'll also help introduce the reading series' theme this year, "Foreseeable Futures." Hemon's reading will be followed by an onstage interview entitled "The Future of Fiction," conducted by Pitt English professor and novelist Irina Reyn.

Hemon, a native of Sarajevo, Bosnia, was not yet 30 when he sought political asylum in the U.S., in 1992. (He was visiting when war broke out back home.) His work frequently chronicles life during war and the postmodern immigrant experience.

In an appraisal last year in The New Yorker, critic James Wood called Hemon a "superb" stylist, an accolade all the more remarkable because, as of 1992, Hemon knew only rudimentary English. His style is sometimes compared to Nabokov's. Wrote Wood: "[Hemon] uses his astonishing talent to notice the world with a sarcastic, wily precision that is then put in tension with his love of surreal metaphor."

Just as many arts groups open their seasons this week, American Shorts closes its 2009 programming. The series concludes by hosting Australia-based, Vietnam-born Nam Le, author of the well-received 2008 short-story collection The Boat.

The stories of Le, a former lawyer, take readers to locales from Iowa City to Colombia, Tehran and Vietnam. Writing in The New York Times, critic Michiko Kakutani called the book "a haunting marvel." 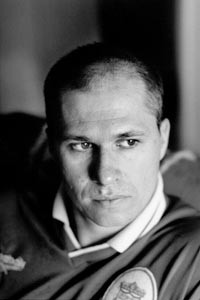