Ring Of Honor takes over Stage AE on Oct. 13

“It’s been a long journey, but each week we make progress and advance. That’s awesome to be a part of.” 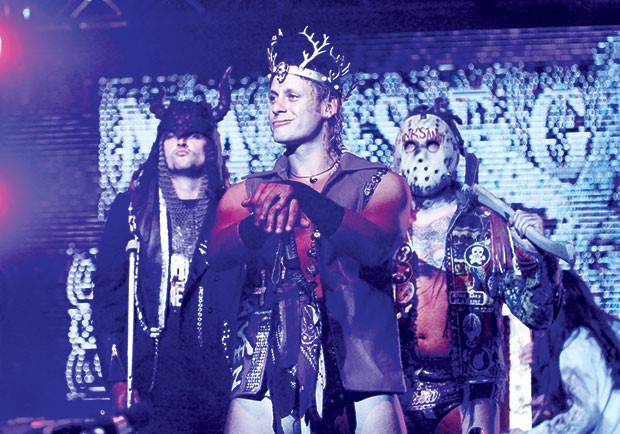 Photo courtesy of Bruno Silverio
Matt Taven and The Kingdom

Ring of Honor is one of the most admired wrestling companies around the world. Its fans are passionate, and it’s an aspirational company to work for if you’re a green wrestler. As part of its annual Global Wars tour, a partnership with New Japan Pro Wrestling, Ring of Honor takes over Stage AE on Friday for a night of dream matchups.

City Paper had the opportunity to chat with several of ROH’s finest about the journey of the Women of Honor and the machinations within the wrestling stable known as The Kingdom.

The Women of Honor will compete in a six-person tag match this Friday.

While the men’s division is well established, the Women of Honor have been working hard to create a division from scratch. Originally, ROH featured the occasional one-off women’s match, but the fans wanted more. The company decided to put the division’s creative control in the hands of the women who occupied its roster.

One of these women is 23-year-old Deonna Purrazzo. She’s the first woman to achieve a wrestling hat trick; she worked for WWE, ROH and Stardom in Japan, all in one year.

“It’s been really cool,” says Purrazzo. “I feel like not a lot of people get to capitalize on so many cool activities so fast. It’s been so very fulfilling.”

Purrazzo comes from a competitive-cheerleading background. Although some might find that surprising, she insists that women from cheerleading or dancing backgrounds are naturals in the ring.

“Cheerleaders and dancers pick up so quickly on footwork and routines, which are essential parts of learning how to wrestle,” says Purrazzo.

In addition to wrestling for Women of Honor, she’s also been instrumental in creating and developing the WOH division overall.

“It’s never been done before, as it wasn’t intended to be a permanent facet of Ring of Honor,” explains Purrazzo. “But now we’re creating it to be permanent, and we get the opportunity to write our own histories and stories.”

It all started about six months ago, when ROH owners asked the women who had been with the company for a while to take charge and turn the division into a fixture.

“Everyone in the locker room has a clear idea of what they want personally, and we can all collaborate based on those desires,” says Purrazzo.

“We all know who we all are as women and each have strong goals. Women’s wrestling has always had a reputation for being catty and selfish, but with WOH we’re here for each other, and we can’t get things done and accomplish our goals without mutual support.”

That mutual support is evident when the CP mentions to Purrazzo one of the signed competitors for Friday’s show: Pittsburgh’s own Britt Baker.

“[Baker and I] wrestled once at an International Wrestling Cartel show,” says Purrazzo. “She’s fantastic, and I’m happy to see her back wrestling with WOH! She got to do it a few times last year, and now that she’s wrapping up dental school, she’s back on track with wrestling full time. I’d love to see her become a full-time member of the WOH division!”

Although each of the ladies has ideas for characters and goals for their careers, the overarching goal is the same: “We want to make Women of Honor an incredible women’s division that competes with WWE’s Superstars and TNA’s Knockouts.”

This kind of development takes time, however, and Purrazzo recognizes the crowd wants more, faster.

It’s different for companies with longstanding histories of women competing in the sport. Purrazzo spent time with WWE through Smackdown, NXT and as a stand-in for the Mae Young Classic. Purrazzo explains that a company like WWE can put wrestlers like Charlotte Flair and Sasha Banks into a steel cage to wrestle because it’s a momentous episode in history, created by years of storyline between the two women — but they couldn’t just start from that point.

“I understand why the crowd wants that instant gratification, but with Women of Honor we are starting from scratch,” says Purrazzo. “It’s awesome that the fanbase pushed so hard for development so quickly. But characters need to be built, and storylines need to be developed, before even introducing a belt, and that takes time.”

In spite of all the challenges, Purrazzo seems over the moon to have an opportunity like the creative endeavor WOH offers, in addition to her impressive year of wrestling around the world.

“It’s been a long journey, but each week we make progress and advance. That’s awesome to be a part of,” says Purrazzo.

The Kingdom is a tag team/stable that has been around since 2014. The original stable consisted of Matt Hardy, Mike Bennett, Maria Kanellis, Adam Cole and Matt Taven.

“[Mike and I] were friends before we started The Kingdom. He took me under his wing when I started to train because I was a few years behind everyone else in training, but we were the same age,” explains Taven. “We were such good friends, so we knew it was going to work because it was real. It worked outside the ring, so the fans will enjoy it when it’s inside the ring.”

As various members of the Kingdom moved to different companies, Taven ousted Adam Cole and decided to recreate the stable in his own image. It now consists of Taven, TK O’Ryan and Vinny “Horror King” Marseglia, all of whom were also great friends of Taven’s on the independent circuit.

The Kingdom is a villainous stable, always with tricks up their sleeves. The trio’s latest antics involve what they call a “Kingdom Conspiracy.”

“In wrestling, it’s a time-honored tradition that the person who loses a belt gets a guaranteed rematch for that belt,” says Marseglia. “But for some reason, that hasn’t happened with the tag-team belt or the Television Championship belt.”

The group released a backstage video in which the guys tortured someone who they thought would have the answers about who was conspiring against them, and when he didn’t, they murdered him.

Obviously, this is “kayfabe” (part of the narrative), otherwise the trio would be in jail. But these backstage videos add a depth to the storyline that TV tapings’ limited time frames and in-ring performances don’t allow.

“We’re always coming up with stuff when we’re just sitting around and hanging out. Most of the time, the videos we put out are a result of us just pressing ‘record’ and seeing what happens,” says Taven.

Although competition is dangerously fierce on screen, Taven insists that it’s the locker-room competition that keeps ROH growing and improving.

“It drives us to be better and better. We come up with things like the Kingdom Conspiracy to make sure we’re getting noticed,” explains Taven. “There’s all these great guys in the locker room, and [you] gotta keep up. I think it’s something that makes all of us be better, work harder and elevate our games.”