Ring in 2015 with predictions and wishes from our music writers

Last week, we looked at what was good and unique in music in 2014. This week, some of our music writers look ahead at 2015: What trends will emerge? What trends should emerge? What local artists are poised to have a breakout year? What should just ... stop?

I hope to see more funk in 2015. New brass band Beauty Slap is bringing us some, but I hope to see some other performing Pittsburgh groups emerge. People like to dance, and some of us are definitely getting sick of electronic music dominating that market. I want some horns, some bass and a James-Brown-type figure shouting at me to "get on up" in 2015.

Five Pittsburgh Producers to Watch in 2015

Music Where You Least Expect It

Pittsburgh could use some more unlikely venues. It would be exciting to see some experimentation about where and how music can be accessible to the attentive audience we have here. Let's make some new small venues. Are you bummed that Garfield Artworks is shutting down? In 2015, let's make at least three more functioning DIY venues.

Sets That Aren't So Epic

Consider every show you saw in 2014. Consider every show you've seen in the last decade. When was the last time you really, truly walked away thinking, "Man, I wish that had gone on longer"? If you possess a superhuman level of patience, you might have a handful of examples. But if so, you're in the minority. Which is why I propose we all work to make 2015 the Year of the 20-Minute Set. I get why one might be tempted to overstay their onstage welcome: Some musicians want to give the audience more bang for their buck, others want to make their own gear-lugging a little more worthwhile. Still others have a lot (a lot) of music to share with the world. But let's face it: You're (probably?) not Bruce Springsteen, and you're probably not selling out football stadiums (and even if you are, that's still no excuse to play for three hours). This year, leave your fans wanting more, and they won't be able to resist showing up the next time you play. 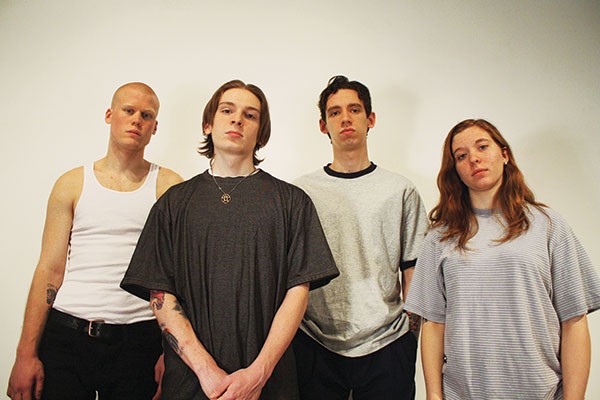 Can we get hardcore bands like Code Orange on a stage with top local rappers and rock bands in 2015?

Let's Put Some of Pittsburgh's Best on One Stage

There are plenty of rock bands that are Pittsburgh darlings that maybe don't get a ton of attention outside of the area. Conversely, there are hip-hop artists (Devin Miles, Boaz) getting national attention, and hardcore acts (Code Orange, Hounds of Hate) touring internationally. Can we get a good sampling of what's great about Pittsburgh music — across genres — together on one show, preferably in one venue, not a neighborhood crawl?

In 2015, let's stop calling it a "guilty pleasure" when we like, say, Taylor Swift. Taylor Swift's songs are well written and well performed and produced to be easy on the ears. There's nothing guilty about liking them. Enjoy listening to R. Kelly or Burzum? That's something to feel a twinge of guilt about.

Photo by Heather Mull
Dazzletine left for Brooklyn, but is poised to rep Pittsburgh this year

Three Pittsburgh Artists to Watch in 2015

Hardo: After beating a drug charge, which brought out the support of Wiz Khalifa and T.I., the Wilkinsburg rapper has set his sights on success with his new project, Trapnati. Hardo has a lot of insight on what it means to grow up in urban environment surrounded by drugs and violence, and he exposes all of that in his music.

Choo Jackson: Choo will release Choodini in February, and with the backing of Mac Miller, he is likely heading for some higher plateaus. Pittsburgh hip-hop fans would be wise to take notice.

Dazzletine: The glam-rock band has relocated to Brooklyn, but cut its teeth here in the Steel City, so it's included on this list. 2015 will showcase a new EP, Lajos, and the band's first full-length, Organomee.

A Year-Beginning Wish for NEXT Year's Year-End Lists

I have a suggestion for improving best-of-the-year lists: Let's open up eligibility to all years. As in, what non-2014 music had the biggest impact in 2014?

Music doesn't age predictably, influences bleed past January, and re-releases find new audiences years after the fact. Rodriguez' Cold Fact (1971) found a second life in 2012. Downloads for "Don't Stop Believing" (1981) increased 150 percent in the week after The Sopranos series finale in 2007. Marvin Gaye's "Got to Give It Up" soared after "Blurred Lines." The songs didn't change; they were just given a new context.

I want a year-end list that celebrates the music that connected with audiences that year, regardless of copyright date. We might learn some stuff.