"I always say if you could bottle up the energy this building holds on a women's weekend, I would be a millionaire." 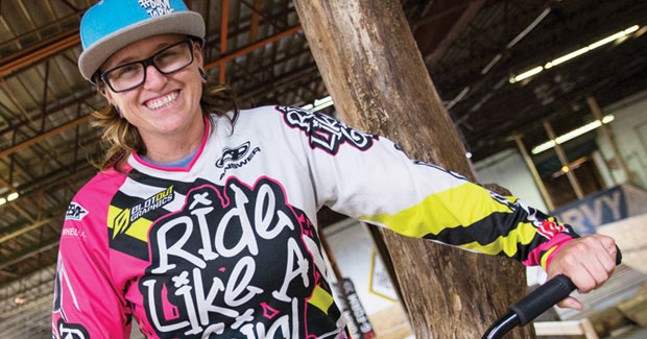 CP photo by Sarah Wilson
Carley Young, creator of Ride Like A Girl, at the Wheel Mill

Ride Like a Girl, the all-female BMX and mountain biking clinic held twice a year in Pittsburgh, is a play on the old taunts that someone runs or throws “like a girl.” This is supposed to imply that someone's skills are in poor form, but anyone who accepts women as athletes knows this to be false.

"To me it’s like, 'ride like a girl,' that’s not an insult. We’re all out here kicking ass," says Kelli Jones, a participant in the program.

This weekend, Ride Like a Girl will play host to a weekend program at the Wheel Mill in Homewood. All ages and experience levels are welcome, including experts who simply want to refine their skills, and newcomers who don't know how to ride a bike at all. But all of them, participants and coaches, are women.

Carley Young, the founder of Ride Like a Girl, started teaching other women bike skills when she was 13. She first brought the program to the Wheel Mill three years ago, and was overwhelmed by the attendance the first year.

Per a survey, participants agreed they'd rather pay more money and have less people, so that's exactly what they did.

Karen Brooks, another Ride Like a Girl coach, believes the popularity of the clinics has to do with the changing dynamic of the sport, which has historically been less instruction-oriented, and more figure-it-out-for-yourself.

"The old standard for biking used to be you’d just go out with friends who’d been doing it for a while and try stuff and crash, or not make it, or eventually you might figure it out on your own," says Brooks. "Instead of just going out and getting hurt, you can learn with safe steps."

Walking into the Wheel Mill, the first room you pass is also the most advanced, with large wooden structures for doing tricks. Young notes there is always someone riding in this room and it can be intimidating to newcomers. This is especially true if a newcomer is a woman seeing men ride with confidence they don't yet have.

Jones started attending Ride Like a Girl in January 2017 and understands the fear.

"It can be intimidating because mountain biking and BMX both are male dominated. I mean if you look at the pictures of any mountain biking event, it’s mostly guys," says Jones.

A quick Google image search of either of these events indeed shows mostly men, similar to most extreme sports. Studies point to men taking more risks than women, and that might be why formal instruction for BMX and mountain biking are relatively new.

"Not to be gender essentialist or anything, but it does seem like more women want to know how to do things properly and don’t wanna just fling themselves down a mountain," says Brooks.

Young notes that there is occasional criticism from men complaining that the park is closed or that there isn't a men's weekend.

Most, however, are accepting and understand that the addition of more women will only help grow the sport.

The demographics of biking sports are changing as more women become involved, and Brooks sees it eventually evening out to 50/50. Even so, she doesn't see the clinics ending because the interest in learning about biking has only grown.

"I think [women’s clinics will] always exist and I think honestly that bike education in general is expanding and should expand to include everyone," says Brooks.

In the winter, when the park is closed to the public for the weekend, and in the summer, when crowds are smaller, the all-women space of Ride Like a Girl fosters an encouraging environment of white-hot positivity. It's common for mothers and daughters to attend the weekend together, with some traveling from as far as Georgia.

Young remembers one year when a young rider asked her mother to join her at the course as a Christmas present. Initially, the mother was apprehensive and preferred just to watch. By the end, had the whole room cheering and crying upon riding the whole course. "I always say if you could bottle up the energy this building holds on a women's weekend, I would be a millionaire," Young says.

Jones went alone her second year after going with friends for her first, but that didn't stop her from feeling welcome. "Most of the people I didn’t know, and by the end of the weekend, you’ve made friends, you’re exchanging phone numbers, you’re exchanging hugs, high fives," says Jones.