Eastside, that newfangled hybrid of Shadyside and East Liberty where the People's Cab parking lot used to be (described like a true Pittsburgher!), is fast becoming something of a dining district. It's the kind of destination so rich in choices that you might just say, "Let's meet at Eastside and pick a place when we get there."

As far as we are concerned, there are no bad choices around the epicenter of Centre and Highland avenues, at least not among restaurants we've recently sampled. The latest to open, Richard Chen, not only upholds the area's burgeoning reputation as the dining hot-spot of the East End, it pushes it to mouth-watering new heights.

Proprietor Chen himself is a Michelin-starred veteran of the glitzy Las Vegas and Chicago dining scenes. As such, he brings an element of worldly sophistication to the -- like it or not -- more provincial Pittsburgh setting. Richard Chen occupies a primo space on the Highland Avenue corner of the Eastside development, with an outside wall that follows the curve of the street and a ceiling that rises to the steep grade outside. While there are quiet, classically Asian touches -- niches with artifacts arranged just so, a miniature forest of birch branches running along that curved wall -- the overall effect is frankly modern, from the oversized lanterns adding vibrant cylinders of color to the combination of dark-stained wood with brightly lit white and silver panels. Noise levels can be a little high, and neighboring tables a little close, but the overall effect is sociable, not crowded.

Given Chen's résumé, we knew going in that this would be no ordinary Chinese meal. But what would it be? Asian fusion? Slow Food-style fetishization of ingredients? Or simply the same Chinese-American food we all know and love, but more impeccably prepared than we've ever known and loved it?

To an extent, it's all of the above. Traditional dishes and dim sum, like dumplings and kung pao chicken, share the menu with such contemporary concoctions as Asian pear salad with daikon lo mein. In addition to appetizers, the menu offers a dozen full-size entrees and another dozen entree-style dishes in smaller, side-size portions. The full plates are generous enough for sharing, but there's not a lazy Susan in sight. Traditional Chinese-American style dining, with entrees shared around, is not Richard Chen's style. Instead, the menu seems to encourage a mix-and-match approach to the carefully selected tastes on offer.

We began in the most traditional vein with shumai (steamed dumplings) and glazed pork belly with steamed buns. The former were excellent, dense with succulent shrimp within a pliant wrapper. The latter turned out to be a sort of deconstructed char siu bao, with mildly seasoned, buttery-tender pork served with vegetable garnish, hoisin sauce and steamed wheat buns on the side, to be assembled to the diner's preference. The big, fluffy buns were hard to proportion correctly to the other elements, but the pork was superb, and the homemade sauce was light yet intensely flavored.

Another appetizer, crispy scallops, consisted of shellfish enveloped in triangular pouches of near-brittle spring-roll wrapper. Chopping the scallops allowed their sweet, briny flavor to mingle delectably with scallions and other seasonings.

When you say "Chinese restaurant," Jason thinks "lo mein." He was delighted to see it on Richard Chen's menu and fairly demolished his side serving, which he called the best lo mein he's ever had. Substantively, it was not that different from the takeout standard: the same shreds of pork, the same strips of vegetable (although green bell pepper was an unusual and successful addition), the same wheaten noodles. Yet in Chen's kitchen, these ingredients came to together in a way that maintained individual textures and flavors while creating a gloriously unified whole.

A dining companion's kung pao chicken was a similar success, dialing back the brown sauce until there was just enough liquid to glaze the components with its peppery flavor. Meanwhile, though Jason's entrée of Sichuan chili prawn delivered none of the fire he expected, the shrimp themselves were wonderfully succulent and firm, and Jason was happy their flavor wasn't masked.

Angelique's red snapper hot pot featured beautifully cooked fish which broke apart easily -- but not into irretrievable shreds -- under her chopsticks. It was accompanied by mushrooms and tofu which extended the meal without overwhelming the snapper's mild flavor. But the real star of this dish was the sauce: tangy, subtly spicy, and bursting with a heady mix of both earthy and oceanic flavors, the sauce could make the most humble ingredient a delicacy.

We're already way over our word limit and we haven't even mentioned the fried red rice or truly marvelous desserts. You'll have to taste for yourself how Richard Chen brought modern sensibility to the Chinese-American tradition, emphasizing what a dish can be, rather than what it has been. 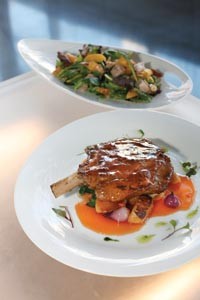