CP photo: Jared Wickerham
The ‘Wingit’ meal, which includes six chicken wings and a choice of sides such as cole slaw and greens

Seven months ago, Ribs N Bread quietly arrived onto Pittsburgh’s barbecue scene. In the midst of a booming demand for barbecue in the city, owner and pit master Rander “Randy” Thompson, who founded the small, take-out only joint with his wife Becky, announced the grand opening of the Oakland restaurant through a single Facebook post.

South Carolina-style barbecue can be mapped by sauce, though a vinegar base is echoed all over the state. Vinegar makes for a tangy sauce that carries more of a bite than the molasses-based Kansas City-style and more body than a Texas-style brine, or “mop sauce.”

A thin, simple vinegar and pepper sauce is tied to the Northern region of South Carolina, the sweeter mustard sauce popular toward the middle (an area known as the “mustard belt”). Light to heavy tomato sauces pop up to fill the gaps, but mustard sauce is the state’s claim to fame.

At Ribs N Bread, Thompson features three sauces: mustard, red, and house (a blend of the two). Diners have a choice of which sauce goes where, though most customers stick to the same outline — mustard sauce on the chicken and red on the ribs.

As I chatted with Becky about the high-tech smokers, which are all in-house behind the counter, and smoking times (“low and slow,” meaning hours upon hours), Randy prepared my order: a combo platter of ribs and chicken, six wings, collard greens, mashed potatoes, and cornbread. Not one to ignore pre-tested methods (and Becky’s recommendations), I followed suit, adding in the house blend to Randy’s smoked wings.

Randy brings a certain artistry to prep. His knife glided easily through a half rack, meat falling off the bone. He painted the ribs like a canvas with a deep, tomato-y sauce, the chicken then slathered by its mustard counterpart. As Becky puts it, Randy “is in it to the bone — the pork bone."

“Don’t bite your fingers off,” were Randy's parting words of advice, and good ones at that (I actually might have, if not for the warning). Each meat was done perfectly, not one piece too dry. The sauces carried distinct flavors, but when mixed together on the wings, made a winning marriage of sour and sweet. 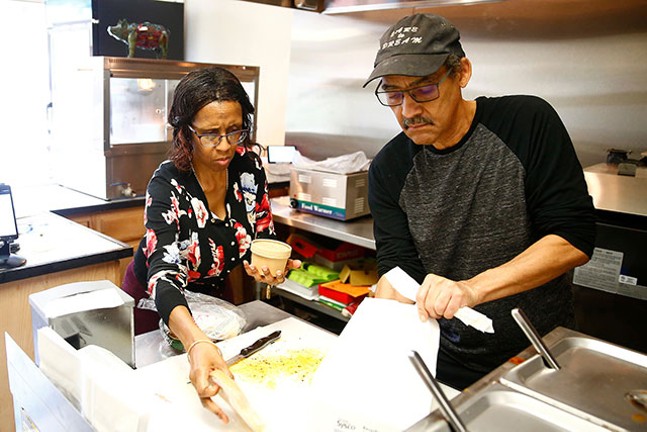 Sides held their own against the smoked spread, though the cornbread was the clear star. The slice was thick as cake with a bit of cinnamon sprinkled in. It was fluffy, a little doughy, and filled with warm spice.

Randy spends his days at the smoker, sometimes waking up at 6 a.m. to start the first rack of ribs. He’s been honing his craft for decades, starting in the kitchen with his grandmother. As Becky says, “You can taste the commitment.”

Ribs N Bread focuses on featuring local products to their guests. Look out for that Red Ribbon soda in the cooler.

Like most barbecue spots, Ribs N Bread serves slices of white bread with their meals. As a friend puts it, “It’s like having a little cake with some barbecue sauce.” Dip it, make a sandwich, or just eat it. It’s the best barbecue side you could have.

According to Becky, most of their service happens after 10 p.m. They’re open late most days of the week, so next time, ditch the midnight McDonald’s for something better.