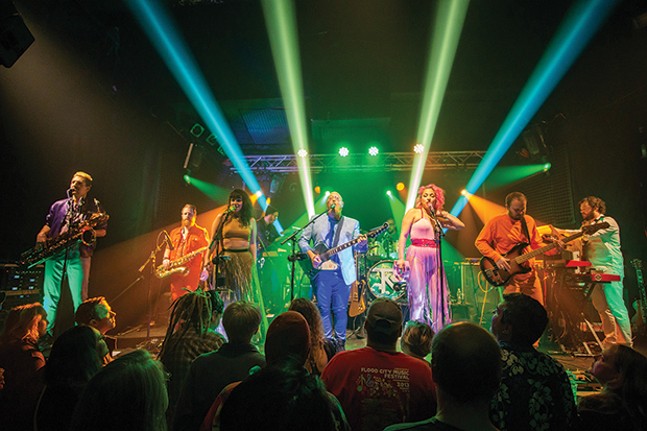 Ben Penigar, owner of Rex Theater, is one of the reasons Carmi Soul Food restaurant moved to the South Side. While the neighborhood is often stereotyped as a place for college kids to get drunk and party, the section of Pittsburgh has more to offer than just weekend sidewalk throw-up. And Penigar wants everyone to know this and feel at home on Carson Street.

“We are grateful to have [Penigar] as a neighbor,” says Carmi co-owner Carleen King. “He is one of our biggest cheerleaders and encourages his clientele to visit with us and offers tickets to our staff and customers. He certainly helped quiet any of the insecurities we had about moving into the South Side.”

To put it bluntly, the South Side is not everyone’s first choice when deciding where to grab a drink or see a show. But by making the Rex an all-inclusive, enjoyable venue — and spreading this mentality to other business on Carson — Penigar hopes to uplift the community.

“Our desire is for everyone to feel welcome at our shows, regardless of race, religion, sexual orientation, or self-identification,” Penigar says. 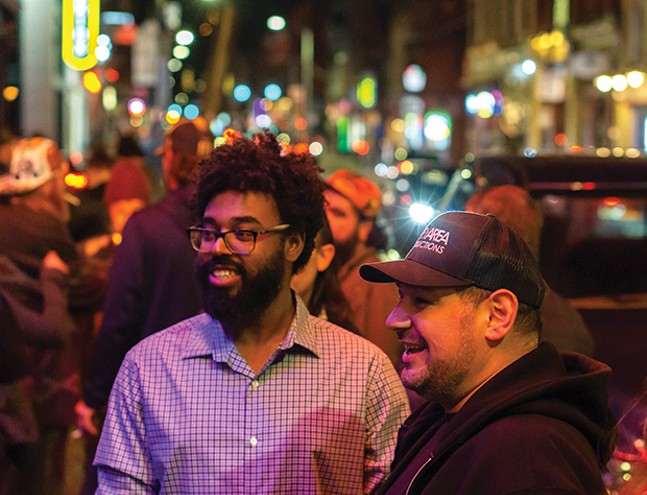 CP photo: David Heath
Rex Theater owner Ben Penigar (right) with Jusitn Landers outside the venue
Scott Forsyth of Grey Area Productions has been booking performances for over nine years and says he only chooses facilities that he is comfortable being in, like the Rex, Spirit, and Cattivo.

“What we’ve done [at the Rex] is try to create an environment where people can just come in and enjoy themselves,” says Forsyth. “It’s a bold comparison to make a connection to Disney World, but I think the same philosophies are in place, where you want to go, see a show, and leave the rest of the world at the door. If the security and box office personnel are friendly and everybody’s smiling and greeting you with warmth, then you’re going to enjoy your experience.”

Attending shows for Penigar and Forsyth is a spiritual sort of experience, one they believe everyone should be able to revel in.

"For many of us, music is our religion,” Penigar says. “We treat music venues as our churches, where we come to cleanse our souls and recharge our spirits.”

Penigar met most of his friends — including his girlfriend — going to concerts. Music brings people together that might not have met otherwise and is a common source of joy in an often dismal world.

“We give a home to live music in an effort to facilitate a community of like-minded individuals. It's a place where everyone should be able to feel comfortable to be themselves, where we get to feel that we are part of something bigger than ourselves and a community that matters to us.”

Venues like Rex Theater and Carmi offer a reprieve from the debauchery of late-night Carson Street revelers. And they don’t want to be dismissed because of that other nonsense.

Check out page 2 for a list of upcoming shows and events:
1602 E. Carson St., South Side. rextheater.net


Upcoming shows and events at the Rex Theater

The Prince Project
A Prince & The Revolution tribute band.

Sat., Nov. 24
Papadosio
Touring to promote its September 7 release, Content Coma, Papadosio is a mix of jazz, rock, and electronic, but in space.

Tue., Nov. 27
The Contortionist
This progressive metal band from Indiana showcases fearlessness in musical expression, designed to please the artist as much as the audience.

Wed., Nov. 28
The Floozies
Festival junkies will recognize The Floozies from lineups across the U.S. They are the electro-funk kings.

Thu., Nov. 29
Haken / Leprous
Get a dose of music from overseas with progressive metal bands Haken (London) and Leprous (Norway).

Fri., Nov. 30
Bayside (Acoustic)
Guess where this punk rock with an alternative, emo twist band hails from? The Bayside, neighborhood of Queens, NY.

Mon., Dec. 3
Broadside with Confidence
Listed as one of the 100 Artists You Need To Know in 2015 by Alternative Press, this pop punk band from Virginia is hitting the road with Australian punk band, With Confidence.