How is bartending at events different than a bar or restaurant?

It’s kind of wonderful. When it’s high volume, it’s not [the] high volume that most people think of – there’s a reason we serve everything in biodegradable plastic. It’s so fast because you want to get people right back to the show. Most bars, you’re there to entertain clientele, they want that interaction. There’s an hour between doors and show, and we do have a little bit of that, regular customers that we talk to and get to know, but it’s not quite the same. I tell people that this is the Shangri La of bar jobs — you’re here for a short amount of time, you do a lot of volume, and then you’re gone. You don’t have the customers that are upset, having a bad day, not happy to be there, drinking for whatever reason. They’re there for entertainment and excited about it. It makes for a really good experience for employees as well.

Do you have to make cocktails?

It’s mostly beer, Jack and Coke, gin and tonic. I’ve had people ask for legitimate cocktails, and it’s hard not to laugh because they’ll see easily at least 30 other people trying to get drinks. Does it look like I muddle? I don’t have time for muddling.

Does it slow down when bands are on?

Certain shows, I know I am going to get killed straight through. Other ones, we’re only busy during set break, then while the band’s on, it’s almost dead. It’s strange, I’ve taught myself how to do ordering based on those kinds of things.

Do you have an expectation of the guests based on the band?

Absolutely. You know based on genre if they’re going to be a heavy drinking crowd, a quiet crowd, you have some crowds that are so polite it’s almost painful – that for whatever reason want to instinctively form lines. You have to call them up, “Heeeey, I can wait on several people at once, come on, it’s okay!”

Are there ones you look forward to more than others?

Superbusy nights, not just because of money, but part of why I love this job so much is I also love chaos. There are crowds I look forward to, because I know they’re a challenge, meaning it’s going to be steady busy, not [that] they’re bad people, but it’s going to push me. I like that. But I also know the crowds that are super friendly. When I had to have emergency surgery, there was one particular crowd [where] several regulars found out how to contact me to check in on me. Those I absolutely love. 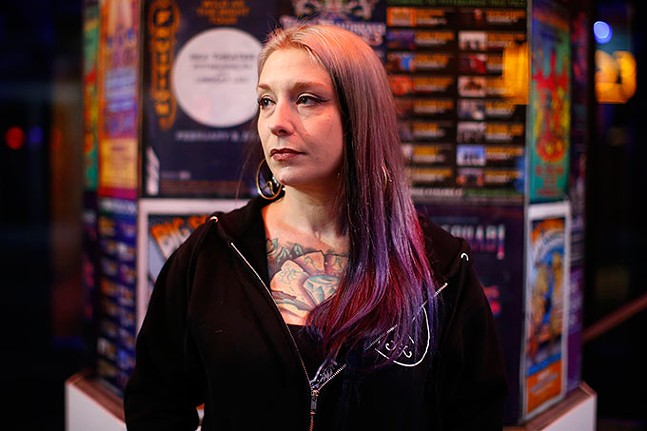 How did you start?

I was kind of recruited. One of [Rex’s] bartenders who they needed for that Friday night had quit; I happened to be behind the bar in another establishment that day and the then-owner came in and was in a panic trying to figure out what to do. He looked at me and said, “What are you doing Friday night?” Real intense like, and I’m like, “Uh, I don’t know where you’re going with this man, but … nothing?” That was ten years ago and I’ve been here ever since. When the owner changed I just kind of came with the building; I’m one thing they kept.

This particular job has allowed me to cultivate a life and a lifestyle that genuinely makes me happy. I can be myself here and it’s appreciated. I don’t have to pretend to be someone else. I can take gaps of time [off] and travel; they don’t expect me to be here every day. I also like that it has almost forced me to get to know people outside of the social circles I normally travel in, and I’ve met a lot of really wonderful people over the years. And I love that.