Revisit "girl power" with The Spice Girls Live at The Inn

In Terry Boyd's paintings, the group appears to be a persistent though somewhat faded memory 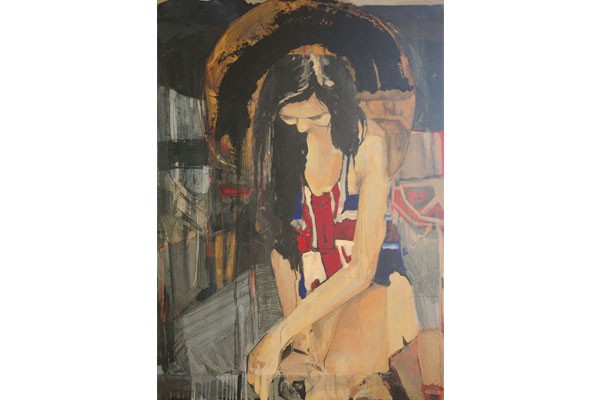 TERRY BOYD: THE SPICE GIRLS LIVE AT THE INN

How many Spice Girls can you name? You can be sure Terry Boyd can name them all: Scary, Sporty, Baby, Ginger, Posh. That's because Boyd's not just a fan, he's a fan with a collection of Spice Girls memorabilia — lunch box, fanzines, a T-shirt proclaiming "Spice Boy." Boyd's also got memories of relatives who liked to dress up in Spice Girls-inspired outfits, with the snapshot evidence on display as part of his exhibit The Spice Girls Live at The Inn.

You may recall that the Spice Girls were more than a teen pop group: They were a global marketing phenomenon, starting with their 1996 hit "Wannabe," and ultimately became the best-selling British group since The Beatles. They meant a lot to a lot of people and sometimes still do, including their status as symbols of "girl power," which saw conventionally feminine appearance as not being exclusive of social and political empowerment. They were also seen as representatives of a cooler, post-Thatcher Britain, and ranked high as gay icons.

Boyd's 10 paintings here pay tribute to this '90s sensation. Loosely rendered in oil, there are enough signifiers for fans to recognize the band. In addition to the sparkly tight dresses, animal-print fabrics, big hair and Union Jack — in short, British glamour of a decade-plus ago — the paintings capture something of the feel of the publicity stills upon which they were presumably based, with the five women seen in theatrical poses facing the camera and the audience, as it were.

Boyd's Spice Girls paintings have antecedents in Warhol's Marilyns and Lizzes, as well as Elizabeth Peyton's stylized celeb portraits. As with many younger artists, Pittsburgh-based Boyd finds pop culture a suitable source for extended consideration. In so doing, he has created a series of sketchy paintings in which, instead of details such as facial features, he's taken painterly liberties with gestural brushstrokes and expressionistic backgrounds. Consequently, the Spice Girls appear to be a persistent though somewhat faded memory. The one painting in which the Spice Girls don't appear is "All Is Forgiven," featuring a fan dressed in a Ginger Spice-inspired Union Jack outfit. I'm not sure what's being forgiven, but I'm reminded that without fans there can be no celebrities, and without excess there can be no glamour.