"Forget you once had angles, let / your head engulf the rest of you" 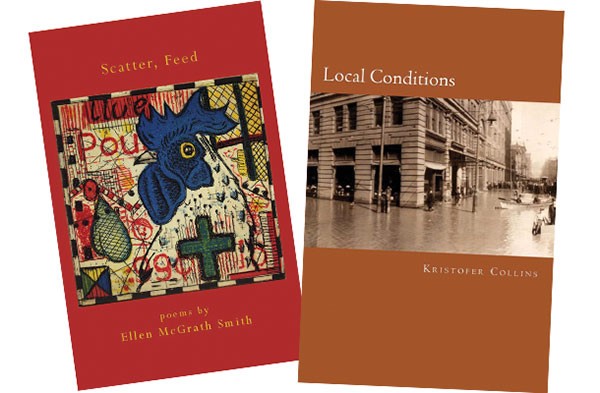 Scatter, Feed (Seven Kitchens Press). Several poems in Ellen McGrath Smith's latest chapbook are titled after yoga poses. That's fitting, because even as these 18 poems continually surprise, they seem to strive for a kind of balance. As Smith writes in "Warrior II": "Forget you once had angles, let / your head engulf the rest of you ... Every angle is a curve if you can push it to its end and then / a little more."

Smith can be plainly poignant, as in "Because the Wind": "[S]omewhere in Greece, a man is so lonely he photographs roses / and sends them / to what he imagines a woman must be." In "The Rain [Mainly] Falls," she waxes visionary: "In less than two hours, roiling in the swamps / of their own glands, the people in the room morphed into every / living creature, then, in human form again, rolled from the shells / of their own corpses into fetal balls, plugged into lotus leaves / like batteries, stood, considered mountains, and went home." Often, these verses seek repose and rebirth after pain. A highlight is "Corona: The Apples in Winter," a sophisticated longer poem that evokes sensuality, transience, loss and decay.

Local Conditions (Coleridge Street Books). Its title and cover image — an old photo of a flooded downtown — might suggest that Kristofer Collins' new chapbook traffics in a certain melancholy. Rather, these 25 poems are baldly honest, true to the sort of stream-of-consciousness exploration that in "My Wife Goes to War With the Deer" skips from the speaker's wife complaining about deer eating her backyard to: a marauding groundhog; Whitman nursing Civil War soldiers; and PTSD. "When My Daughter is Born," in particular, is practically a cure for the sentimentality its title might evoke.

Collins also offers straightforward scene-setters like "Heaven" (about a bar) and character sketches ("Ruth"). In "Poem for M. Callen," the speaker is "hoping to score / A direct hit on some childhood trauma and salvage the waste / Of it, dragging the soaking thing on to that most barren of shores — / The blank page." And while Collins' poems often traffic in gritty anecdotes from Pittsburgh's streets and taverns, he also impresses with the haunting "The Old Stories": "I tell you there is love / But often I am not certain. ... I have / Not taken a new name, but still I am different."