Review: Pig is the Nicolas Cage show, but not in the way you think | Screen | Pittsburgh | Pittsburgh City Paper 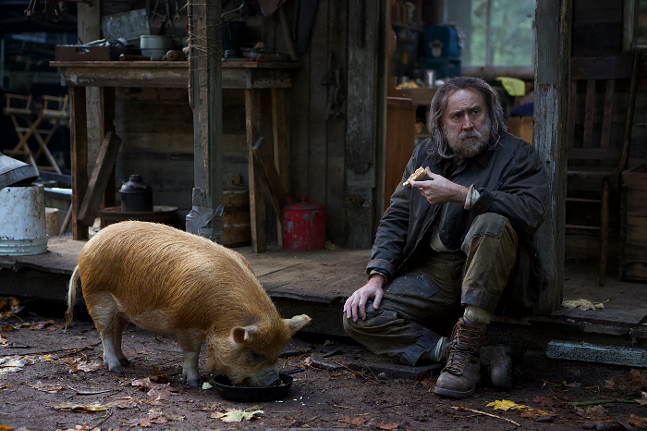 Image courtesy of NEON
Nicolas Cage and a pig in Pig
Sometimes all it takes is contrast. Loud, then quiet. The opening to writer/director Michael Sarnoski’s Pig knows this well.

Rob (Nicolas Cage) is sleeping in his cabin in the woods outside Portland, with his prized truffle-hunting female pig, when someone kicks his door in. He’s left bloodied on the ground as they kidnap her, and we’re left watching him listening to her ear-piercing shriek. Morning comes, Rob pulls himself off the floor and tries to whistle for his pig to come back. Barely a sound escapes his lips.

It’s a devastating combination of scenes, in a film with ample room for devastation. The entire plot of Pig can essentially be summarized as “Man gets pig stolen, goes on a quest to get her back," but John Wick-with-a-pig this is not. No, Sarnoski’s debut and Cage’s latest in his series “Whatever the Hell Nicolas Cage Wants to Do” is more a meditation on loss, choice, and stepping away from it all.

After recovering from the kidnapping, Rob enlists the help of cocky, overeager fine foods dealer Amir (Alex Wolff), who reluctantly agrees to drive him downtown to start questioning people who may have had a motive to take the pig. Secrets start to come out about Rob’s past, and there are various moments that throw the entire story into a new light.

However, Pig is defined by its restraint, which may come as a surprise to anyone seeing Cage at the top of the billing. But as Rob, he turns in some of the best work of his career, stripping his explosive magnetism to its core to figure out what makes Rob tick. There’s still some classic Cage meme-able moments (Rob aggressively screaming at a child to scare as he steals his bike got the biggest laugh from the audience), but we're treated more to the quiet heartbreak that Rob wears around with him everywhere, his massive mane of hair and beard belying someone who doesn’t have any clue how to cope with the world anymore.

Wolff is nearly as impressive, showing a range and depth that was hinted at in Hereditary but never as fully realized. Here, he’s all bluster and false confidence, a physical representation of what Rob was trying to leave behind.

And in his first film, Sarnoski is smart enough to know that the film’s strength lies in its leads, and gives them the space to operate. He relies too heavily on a shaky cam that doesn’t serve much purpose, but he has an innate knack for framing faces, especially Cage’s. He maximizes this power, finding angles that let us feel right along with Rob, even as he remains silent for long stretches.

Most notably, he uses contrast any chance he gets. Rob, looking essentially homeless, sits in a gleaming Camaro, or a five-star Portland restaurant. Amir will ooze swagger, then get around his father and resemble a child. Pig shows us these stark contrasts to highlight what these people really care about, and why. “We don’t have to care, ya know?” Rob says at one point, seemingly asking himself as much as anyone else. Pig explores how far we’ll push life away, and what will finally make us break down and start caring again. It might be a pig, or a meal, or a car. It’s not a perfect film, but it’s unique, it’s often beautiful, and it certainly cares.
Pig is now playing at AMC Waterfront 22 (300 W. Waterfront Dr., Homestead) and Cinemark Robinson Township and XD (2100 Settlers Ridge Center Dr., Robinson)

The Northman is a jaw-dropping work of madness