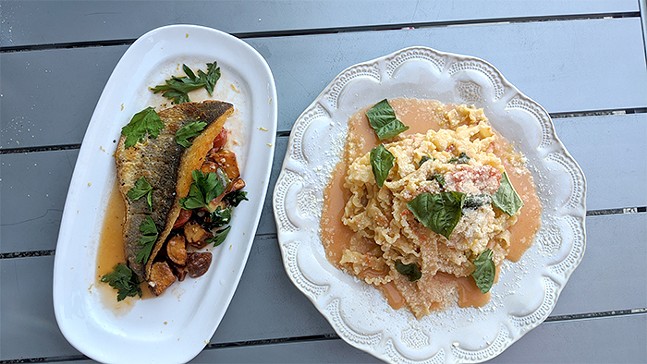 Sitting down in the restaurant’s patio expansion — a pergola-covered, semi-enclosed line of spaced-out tables next to the parking lot of Pizzeria Davide — felt both ordinary and strange at the same time. But despite this, and the fact that DiAnoia’s runs take-out, curbside pickup for dinner boxes, and outdoor dining simultaneously, the service and food was exceptional.

The restaurant has pared down its menu in line with the pandemic — I assume, to keep food costs down with a low number of guests — which I appreciated. Otherwise, I might have sat all night debating between dishes.

The night started off with a smattering of small plates. I paired fresh bread, DiAnoia’s top-notch pizza dough bubbled into a giant, thin but still spongy, charred loaf, with whipped ricotta and meatballs. The ricotta, doused in olive oil, was smooth and light, its consistency slightly thinner than a typical ricotta, but as light as Cool Whip. Meatballs, a DiAnoia’s staple, were as rustic and homey as I hoped.

Escarole, beans, and sausage, DiAnoia’s play on the classic greens and beans, was one of my favorite dishes of the evening. Their stock was thick as gravy, matched with mild white beans and tender greens. A spicy kick was a nice finishing touch, but it was the rich note from the housemade sausage that won me over.

The pasta was one of those dishes that had me returning for one more bite, even though I was on the edge of becoming too full. It was summer pasta at its finest, the sauce light, peppered with tomatoes, and finished off with a zing from fresh basil. The tripolini was thick and beautifully spiraled, sauce clinging to each noodle’s ribboned edges.

Zeppoles — sugar-dusted Italian doughnuts that punched with lemon — and a cannoli cheesecake capped the meal. The cheesecake was exactly like a cannoli, the texture cool, creamy, and a bit softer than expected. Pistachios and chocolate chips added a nice crunch to the rich filling.

DiAnoia’s is giving the city a delicious — and safe — dining experience. Though takeout will still be my go-to for the foreseeable future, the eatery is one of the many establishments proving that safe service, for staff and diners, is possible.