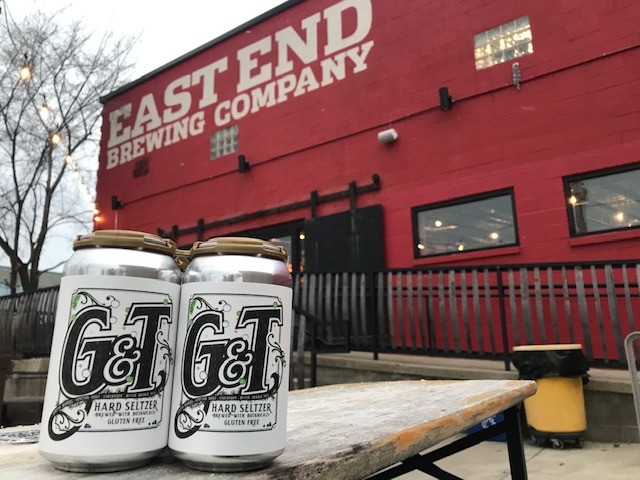 CP photo: Ryan Deto
A 4-pack of East End Brewing's G&T Hard Seltzer
Hard seltzers are everywhere. Versions of the popular alcoholic beverage are now sold by brewing giants like Budweiser and Miller/Coors. Pittsburgh craft brewers are getting in on the action too, but many are making twists to the typical hard seltzer formula.

And East End Brewing’s new hard seltzer is really taking the formula for a loop, and in a really encouraging way. The new G&T Hard Seltzer is a beverage brewed with botanicals similar to those used in making gin, and then finished off with some fresh lime. It’s East End’s take on a canned gin and tonic, except there is no gin and no tonic.

The first sip is a doozy, and wholly unexpected. In a way that might turn off many drinkers. It is not reminiscent of other hard seltzers, it doesn’t really taste like a beer, and it’s not as potent as a gin and tonic (even though it clocks in at 7.5% ABV).

But power through. After four to five sips, the bitterness becomes delightful, which is balanced out well by the lime.

Once you grow accustomed to the fact that it’s not a gin and tonic, and it’s not like other seltzers, it’s actually what you might be looking for. I personally find hard seltzers to be too sweet, and too bubbly. To me, they are like drinking champagne, but without the joy and beauty of the celebratory beverage. Hard seltzers are easy to drink at first, but I grow tired and annoyed of them after a while. I crave bitterness or some body.

East End’s G&T Hard Seltzer is the opposite experience of a typical hard seltzer. It’s hard to drink at first, but then surprisingly balanced and satisfying in the long run. It's not as filling as a beer, even though it is more alcoholic. And I drank two in the same night and didn’t feel any grogginess the next morning.

The combo of bitter upfront with the botanicals — like juniper berries, bitter orange peels, and coriander — followed by a refreshing middle body, then sour lime to finish became more addicting with each sip. But seltzer fans beware, this isn’t a chuggable, fruity beverage like White Claw. It’s a truly unique hard seltzer experience. It’s still fairly easy to drink, but it is more in line with any well-balanced, and flavor-packed brew.

The pale yellow is also nice to see in a seltzer. A good reminder that, yes, this will get you drunk.

Four-packs can be picked up at the East End Brewery in Larimer, and orders can be placed ahead of time on East End’s website. (Limited delivery is also available.) The brewery’s front patio is now open, and tables are spaced safe for social distancing, if you want to try a G&T Hard Seltzer onsite.East End Brewing. 147 Julius St., Larimer. eastendbrewing.com