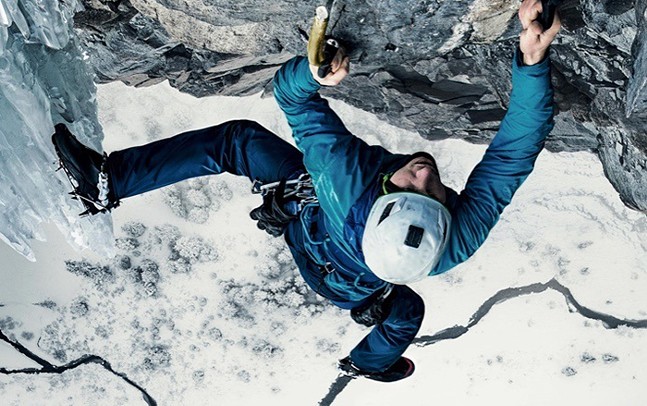 Image: Courtesy of Roadside Attractions
The Alpinist
Throughout Peter Mortimer and Nick Rosen’s new documentary The Alpinist, various people describe the beauty and peace that comes with solo free climbing, with no ropes or assistance, just grip strength and vibes. “When I’m in the mountains on an adventure, life is so incredibly simple,” says Marc-André Leclerc, the reclusive Canadian climber at the center of the film.

The Alpinist is a visually breathtaking work, depicting mountain ranges across the world with the sort of stillness and grace that feels like it has been robbed from Mother Nature over the years. Following Leclerc as he free climbs everywhere from Canada to Argentina, the film captures the immensity of his journeys and the oneness he becomes with the mountains.

The feeling of anxiety is warranted with a film like this, as you’re always waiting for the other shoe to drop. Mortimer and Rosen essentially tell you that you should feel this way, forebodingly highlighting that roughly half of the most famous free soloists throughout history have died during a climb. But as one veteran climber says in the film, “If the death was not a possibility, coming out would be nothing.” The statement adds to the sense of justified unease as you watch Leclerc push the limits of the sport.

If the premise seems similar to Free Solo, the 2018 documentary that pushed extreme climbing into the forefront, you’d be right. That film’s star, Alex Honnold, is featured prominently here, both as a contemporary of Leclerc and as a talking head. But there’s a big delineation, a divide as vast as one of the film’s rock faces, in the climbers’ respective approaches. Honnold clearly set out to be the best, chasing speed records and the sexiest climbs. Leclerc, meanwhile, was invisible for long stretches, so much so that people wouldn’t even know that he’d accomplished another first.

It’s a stark reminder of how the same obsession can manifest in different ways. Just as two climbers can map out their own routes to the summit, one person can be chasing pure adventure and another can be chasing greatness, yet they end up at the exact same point on the mountaintop.

The Alpinist dives into thorny territory and sometimes only comes away with contradictions. Leclerc is a recluse (a synopsis for the film describes him as "nomadic" and "publicity shy," living without a phone or car), yet allows himself to be filmed for a documentary produced by the energy drink company Red Bull. The directors also manage to both denounce and glorify the dangerous world they’re documenting.

In the biggest compliment I can pay it, I left the film understanding why Leclerc did what he did, I just couldn’t fathom doing it myself.The Alpinist is now playing at AMC Waterfront 22. 300 West Waterfront Drive, Homestead. amctheatres.com/movie-theatres/pittsburgh/amc-waterfront-22